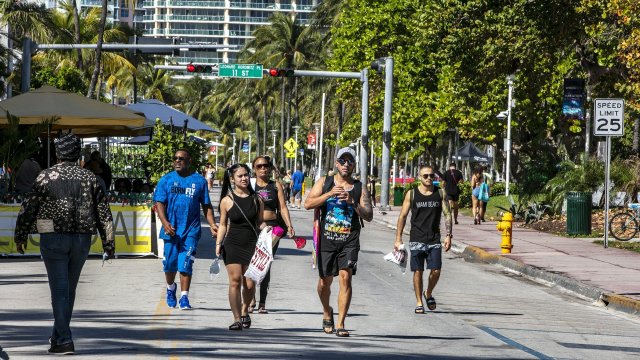 A tough weekend in Miami Beach.

Police used pepper balls on this crowd of spring breakers.

Dozens of people were arrested in Miami's crack down over the weekend amid street fights and rowdiness. That's on top of more than 900 over the last five weeks.

Miami Beach's mayor declared a state of emergency Saturday...closing the city's shore-bound causeways and setting an 8 p.m. curfew. He said the city is "quite simply overwhelmed."

"We're getting an enormous amount of people here, more than we can handle," Mayor Dan Gelber said. "Too many are coming really without the intention of following the rules, and the result has been a level of chaos and disorder that is just something more than we can endure."

Most party-goers did not wear masks and there wasn't much Miami Beach police could do about it. Florida Gov. Ron DeSantis has prohibited local governments from fining mask violators.

This ... as Florida has the highest number of reported cases of the U.K. variant in the country.

The city manager told the Miami Herald he wants the curfew to stay in place until April 12...even as restaurants and bars complain the crackdown is crushing their bottom line.

Miami Beach's police chief said the number of visitors have been growing in recent weeks, and it looks to be a continuing trend through April.