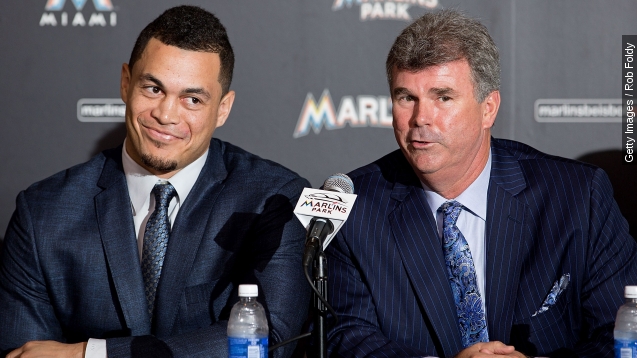 SMS
Miami Marlins' New Manager Causes A Major League Freakout
By Matt Moreno
By Matt Moreno
May 18, 2015
Miami Marlins general manager Dan Jennings will take over as head coach, even though he has no on-the-field experience in the major leagues.
SHOW TRANSCRIPT

After firing manager Mike Redmond Sunday after just two-plus seasons with the club, the Marlins introduced General Manager Dan Jennings as his replacement.

"This is definitely a different avenue to arrive in this chair," Jennings said during a press conference Monday.

Not only is it practically unheard of going from GM to head coach, but Jennings doesn't even have any MLB managerial experience on the field to start with.

And as many are pointing out, Jennings hasn't coached baseball for nearly three decades — when he was coach of a high school team in Mobile, Alabama.

"A well respected baseball man, but what the Marlins have done today is unprecedented in the game. ... How crazy is this move? From the outside it seems pretty odd. From the inside you'd think it would, too," WPLG reporter Will Manso said.

Odd, but Marlins higher-ups clearly believe in Jennings. While he's never been a manager on the professional level, he does have more than 30 years of professional baseball experience, starting his scouting career in 1986 with the Cincinnati Reds.

But the Marlins' track record with managers, and their record overall is a bit concerning.

The Marlins haven't had a winning season since 2009, and you've got to go further back than that to find a manager that left the team above .500. Not since Jack McKeon left in 2005 has a manager left the Marlins with more wins than losses during their tenures.

A writer for NBC Sports says aside from Jennings' obvious lack of managing, he's also without much playing experience, and because he was GM, a position often tasked with making tough decisions to trade and release players, that could put him at a disadvantage.

And a writer for USA Today says this is one of the craziest moves since 1980 when the San Diego Padres hired play-by-play broadcaster Jerry Coleman to manage. "Yet, Coleman was a former second baseman who played for six World Series teams with the New York Yankees and was a pilot in the Korean War."

This video includes images from Getty Images and music by Deal The Villain / CC BY NC ND 3.0.