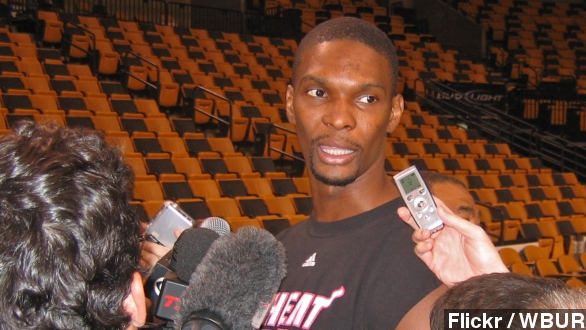 Not one, not two, but three of the Miami Heat's 'Big Three' are reportedly opting out of their contracts to become free agents.

Chris Bosh is expected to be the last of the 'Big Three' opting out of South Beach according to Yahoo! Sports, joining Dwyane Wade and LeBron James on the free agency market.

Now, Bosh has yet to make the move official, and some reports indicate the forward is still undecided on it. But, all three making the same decision wouldn't be surprising.

All three of them reportedly met together Wednesday of last week to discuss their futures. (Via WTVJ)

"This is actually four years to the day, back on June 25th, 2010, LeBron, Wade and Bosh getting together ... about all playing together in Miami." (Via ESPN)

​Then you know what happened after that.

There was LeBron's "decision". "I'm going to take my talents to South Beach." (Via ESPN)

And then a massive introduction party for all three. The three then combined for two NBA Championships — making the finals every year they were in Miami. No word yet on an exit party for the three. (Via Miami Herald)

Now, just because all three could be free agents doesn't mean hope is lost for the Heat.

That same Yahoo! Sports report says LeBron is seeking a maximum deal, meaning he could re-sign with the Heat, but for much more money. According to Yahoo!, "James is eligible to sign a five-year, $130 million extension with the Heat."

Chris Bosh has until midnight on Monday to make his opt-out official.