Mexico Wants US To Investigate Use Of Tear Gas On Migrants 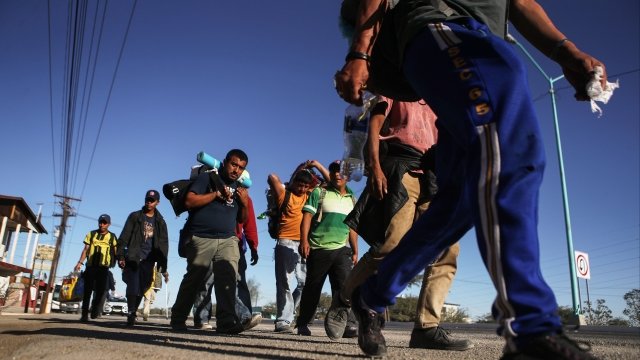 Mexico reportedly wants the U.S. to investigate its border agents' use of tear gas on migrants who attempted to illegally cross their shared border Sunday.

As Newsy previously reported, some U.S. Customs and Border Protection officers fired tear gas to disperse hundreds of migrants near the port of entry between Tijuana, Mexico and San Diego, California. Authorities claim they responded with the use of force after some migrants threw projectiles at them.

"Once our agents were assaulted and the numbers started growing — You know, we had two or three agents at a time initially facing hundreds of people at a time. They deployed tear gas to protect themselves and to protect the border," Chief Patrol Agent Rodney Scott of San Diego Sector Border Patrol told CNN.

Multiple outlets reported Monday that Mexico's Foreign Ministry sent a diplomatic memo to the U.S. Embassy in Mexico City, asking for an "exhaustive investigation" into the use of tear gas.

Mexico's Interior Ministry announced Monday it was deporting at least 98 Central American migrants who were involved in Sunday's incident, calling out their "violent behavior."

More than 5,000 migrants are currently staying in Tijuana, awaiting the chance to seek asylum in the U.S. Since Sunday, both countries have stepped up their security forces along that part of the border.