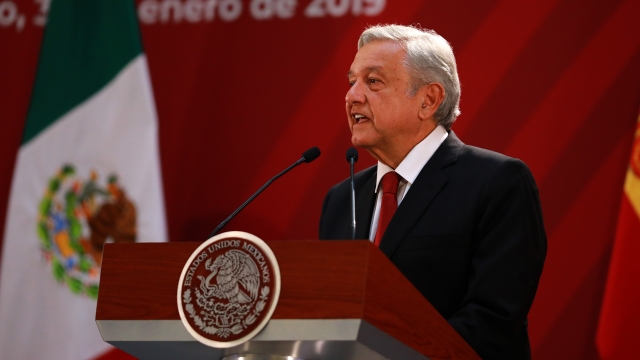 SMS
Mexico Wants US Support For Its New Central America Migration Plan
By Ahmed Jawadi
By Ahmed Jawadi
May 20, 2019
President Obrador said the new plan "goes to the bottom of the [migration] problem" by focusing on economic development over force.
SHOW TRANSCRIPT

Mexico wants the U.S.' support in its plan to help curb migration in Central America.

At a press conference on Monday, Mexican President Andrés Manuel López Obrador said the new plan "goes to the bottom of the [migration] problem" by focusing on economic development over force. He also said U.S. President Donald Trump has "shown interest in hearing this approach" and even made a commitment for U.S. investment in Central America and Mexico.

Obrador said he's not interested in any plans that "reinforce measures of force." Instead, he wants U.S. help with development assistance initiatives "because that is what will help us to calm ... Central America and to have peace with justice and well-being." Obrador said he's told his foreign minister to try to get the U.S., Canada and other Central American countries on board with his plan.

U.S. Customs and Border Protection has been dealing with a surge of migrants at the U.S.-Mexico border recently. It encountered more than 100,000 migrants in both March and April. President Trump even went so far as threatening to close the U.S.-Mexico border if Mexico didn't do more to stem the number of illegal immigrants crossing into the U.S.