Mexico Is Sending National Guard Troops To Its Border With Guatemala 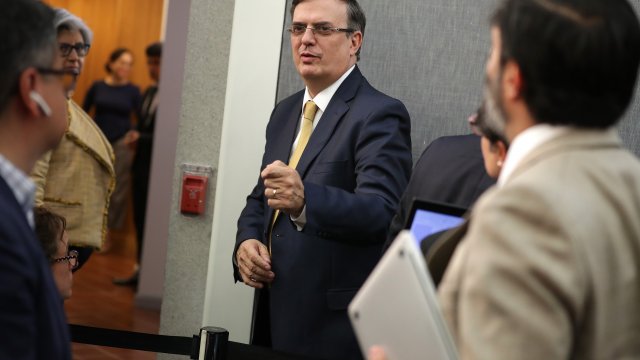 SMS
Mexico Is Sending National Guard Troops To Its Border With Guatemala
By Katherine Biek
By Katherine Biek
June 7, 2019
It's part of the plan to appease the Trump administration and avoid tariffs.
SHOW TRANSCRIPT

Mexico is deploying 6,000 of its National Guard troops to reinforce its border with Guatemala.

That's what Mexico's foreign minister told reporters Thursday after he met with U.S. officials at the State Department for over an hour.

Mexican negotiators have been in the U.S. for multiple days now. They're trying to come up with a plan to appease the Trump administration, which wants Mexico to do more to slow the number of migrants attempting to cross the U.S.-Mexico border.

If the two sides don't come to some sort of a deal during their talks on Friday, President Trump is expected to sign an executive order authorizing tariffs on Mexican imports. If he does sign it, that 5 percent tariff will go into effect Monday.

"We've told Mexico the tariffs go on, and I mean it, too. I'm very happy with it," the president told reporters Thursday.

In addition to sending national guard troops to its border with Guatemala, Mexico has reportedly indicated it'd be willing to make changes to its asylum rules.

Officials on both sides have said it's unclear if the potential deal would be enough for President Trump to call off the tariffs.