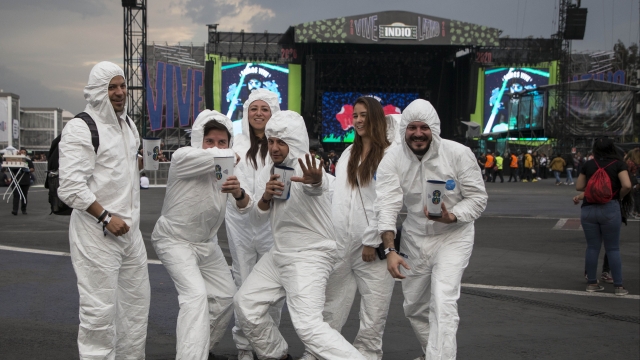 The president of Mexico is drawing criticism for making light of the coronavirus pandemic. President Andrés Manuel López Obrador laughingly shrugged off risks for his country this week by pulling out religious tokens and flashing an American $2 bill.

As of Wednesday, Mexico had reported some 120 coronavirus infections and one death. Despite Mexico's shared border with the United States and dramatic efforts to contain the pandemic worldwide, Lopez Obrador has portrayed his country as largely safe.

He is out in the public, appearing at celebratory events, embracing and shaking hands. In press briefings, he says he will trust Mexico's scientists and medical professionals. But, as Mexico's peso collapses due to virus fears, he downplays the threat. He dismisses criticism as political, as he did after the first Mexican death from the virus.

“Let’s not politicize this event. Because with...this case of last night, it's evident that there is a political interest. And that doesn’t help.”

Lopez Obrador has neither shut borders nor restricted travel from countries hit hard by the coronavirus. He scoffs at health ministry recommendations that Mexicans stop greeting one another with traditional hugs and kisses.

Mexican political commentator Jesús Silva-Herzog Márquez says: "His irresponsibility is almost criminal." Alejandro Macias, an infections disease specialist at the University of Guanajuato, says the president simply "doesn't have the qualifications" to comment on the pandemic.

Some health officials estimate that as many as 250,000 Mexicans could become infected, with more than 10,000 requiring hospitalization and intensive care. But Lopez Obrador points to a World Health Organization disease map and says, for now, there's little reason to worry in Mexico.