Mexico Remains Neutral, But Some Feel It's Cozying Up To Russia In War 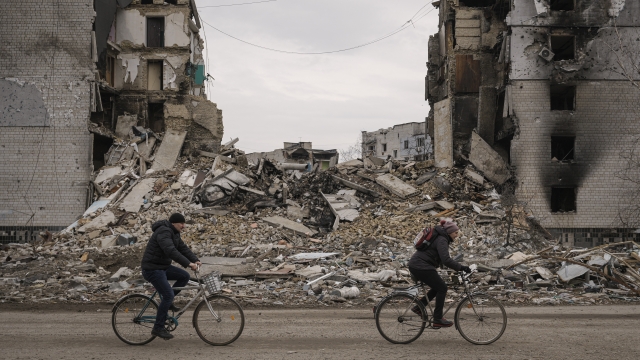 SMS
Mexico Remains Neutral, But Some Feel It's Cozying Up To Russia In War
By Ben Schamisso
By Ben Schamisso
April 5, 2022
Legislators from Mexico's ruling party recently formed a Mexico-Russia Friendship committee, prompting a strong rebuke from the U.S.

At the Russian embassy in Mexico City, Mexicans are rallying in support of Ukraine and urging their government to do the same, shouting, "Glory for Ukraine!" and "No to the invasion!"

Despite having enormous commercial ties to the U.S., Mexico is not aligning itself with the West over the war in Ukraine.

“We want to maintain good relations with all the governments of the world," Mexican President Andrés Manuel López Obrador said.

But Mexico’s refusal to sanction Russia and send aid to Ukraine has offended not only Ukraine, but also the U.S. — Mexico’s largest trading partner by far.

“The president is not very fond of the United States to start with, but also when President Lopez Obrador contracted COVID, President Putin offered to send his medical team to Mexico City to attend to the president, so there's a degree of gratitude there," said Pamela Starr, director of the U.S.-Mexico network at the University of Southern California.

A month after Russian troops invaded Ukraine, lawmakers from Mexico’s leftist ruling party created a “Mexico-Russia friendship committee” and invited the Russian ambassador to the event.

“They're very anti-American, and as such, they believe that the enemy of my enemy is my friend," said Mariana Campero, host of Mexico Matters podcast from the Center for Strategic and International Studies.

The move prompted a strong rebuke from the U.S. ambassador to Mexico who noted that during World War II, the U.S. and Mexico were united against Hitler.

But resentment of American interventionism is long standing in Mexico and Latin America — a sentiment that Donald Trump amplified with his aggressive policies and insults towards the region.

“This anti-American sentiment was, you know, put back sort of to the forefront when President Trump started to criticize Mexicans and called them rapists or criminals," Campero said.

At the same time, Russia and China have been gaining influence in Latin America through investment, propaganda and vaccine diplomacy.

“They would have much rather had Moderna or Pfizer or AstraZeneca, which are better vaccines, but we didn't get the vaccines for them," said Cécile Shea, senior fellow at the Chicago Council on Global Affairs. "They had to go take what they could get, and the Chinese and the Russians came through with them."

The U.S. also suspects that Mexico harbors a large number of Russian spies — a point recently made by a top U.S. military official.

“The largest portion of GRU members in the world is in Mexico right now," said General Glen VanHerck, commander of the U.S. Northern Command. "Those are Russian intelligence personnel."

The statement is an apparent reference to Russia's huge embassy in Mexico City.

“Mexico has very little economic ties with Russia, very little political interaction, so to have an embassy in Mexico that's about 30% larger than their embassy in Brazil is suggestive," Starr said.

Internationally, Mexico has been more critical of Russia, voting, for example, in favor of a UN Resolution condemning the invasion.

But domestically, analysts worry about the way Mexican leaders are cozying up to Russia.

“Together with the Russian propaganda machine, I think it can explode an already anti-Americanism that is still present in the region and could be very dangerous," Campero said.