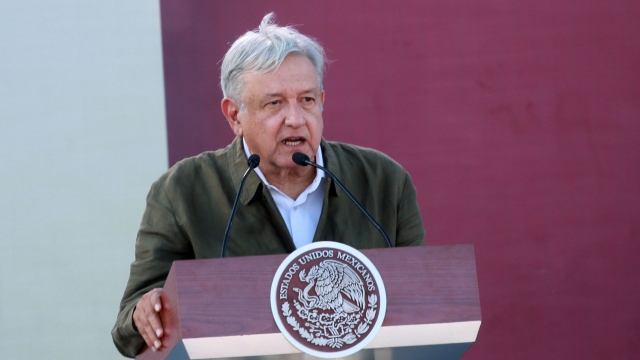 SMS
Mexico Says Deal With US Might Not Be The End Of Immigration Talks
By Matt Picht
By Matt Picht
June 10, 2019
Mexico's government says it could hold new immigration talks with the U.S. if the current agreement doesn't cut migration within 90 days.
SHOW TRANSCRIPT

Mexico's government is trying to clarify the terms of the immigration deal it reached with the U.S. after cryptic tweets from President Trump.

The country's foreign minister said in a press conference that the two countries agreed to a 90-day window in which to test new migration enforcement measures. If the new proposals don't sufficiently limit immigration across the U.S. southern border, Mexico will start more talks with the U.S. about a broader solution to migration.

That bigger solution might have been what President Trump was referring to with his tweets about some undisclosed parts of the U.S.-Mexico agreement that would be "revealed in the not too distant future."

Mexico has publicly agreed to beef up security forces along its southern border, and go along with a U.S. program to keep asylum seekers in Mexico while their claims were being processed in the U.S. In exchange, the White House suspended planned 5 percent tariffs on the country.

But that agreement stops short of a bigger U.S. demand for Mexico to start taking in more asylum seekers by declaring itself a "safe third country." Mexico claims any solution to the waves of asylum seekers headed towards the U.S. should involve other countries in the region, like El Salvador, Guatemala and Honduras.

Mexico's government insists its deal with the U.S. has successfully divorced the issue of trade from immigration. But the White House seems content to lean on the threat of tariffs in the future if its immigration demands aren't met.