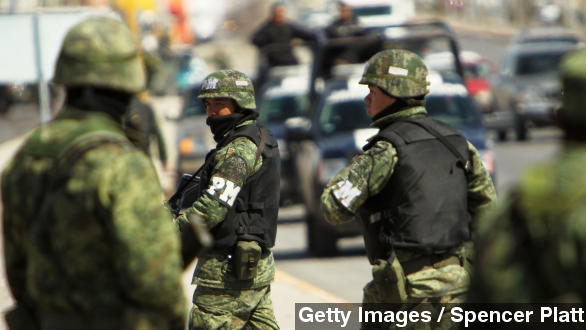 Mexican authorities have captured one of the country’s most notorious drug lords, Servando Gomez Martinez, better known by his alias, "La Tuta."

Gomez was arrested without resistance in the capital of Michoacán State early Friday. Local outlets report an earlier operation conducted in the area last week, in which police raided buildings and seized people connected to Gomez, led to Friday's arrest.

A former schoolteacher turned drug kingpin, La Tuta headed up the Knights Templar drug cartel, which split from the cartel known as La Familia after it collapsed in 2010. Unusually outspoken for a drug lord, Gomez gave multiple media interviews and posted speeches and PR videos online. (Video via Telemundo)

In 2014, Gomez told Channel 4: "I know what I represent and what I am. And one day, something will happen to me. If we've made mistakes, I ask for forgiveness. I know that even if I apologize, not everyone will forgive me."

According to InSight Crime, Gomez sought to distinguish the Knights Templar from other drug cartels with archaic rituals and iconography, as well as a supposed code of honor.

The group controlled large swaths of Michoacán and practiced drug trafficking, kidnapping and extortion. But their power has eroded in recent months, thanks in part to the rise of militant self-defense groups intent on pushing the Knights Templar out of the region.

La Tuta's capture will likely be a much-needed boost for Mexican President Enrique Peña Nieto, who is still grappling with the war on drugs begun by his predecessor Felipe Calderon in 2007. (Video via The White House)

Gang-related violence is a particularly hot topic in Mexico right now, after 43 students were kidnapped and presumably murdered by an organized crime group in Iguala last year. Protesters have blasted Peña Nieto for failing to prevent these types of attacks.

The Mexican government has had several high-profile successes against the cartels; last year they arrested the heads of three major criminal groups, including the notorious Joaquîn "El Chapo" Guzmán. (Video via CBS)

Camilo Perez Bustillo told Al Jazeera, "La Tuta is a symbolic victory for the government, but it's an empty victory. ... Until those structures of corruption, of impunity, of complicity are cleansed, are purged, nothing substantial will change."

It's commonly estimated more than 100,000 people have been killed in Mexico's drug war since 2006.