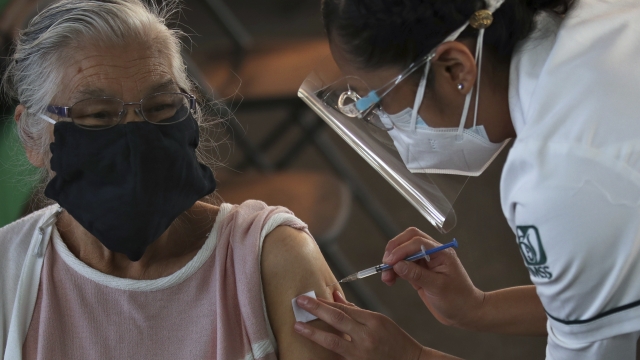 "This is the appointment for the next dose that I will receive on March 17," Dora Argüello Hernández said.

Mexico is ramping up its vaccination effort with the promise of 32 million more doses, all from China.

Mexico announced a deal with Chinese state-run company Sinopharm for 12 million doses of its vaccine. The doses are expected to fully arrive by June. Plus an increase in another Chinese vaccine, Coronavac, to 20 million doses by July.

The company has said its vaccine is 79% effective, but those results came from early-stage trials.

The UAE, which is also using the vaccine, claims it’s 81%.

But data is murky. None of China’s three vaccines used globally have released late-stage clinical trial data. As for the Coronavac vaccine, experts in Hong Kong think it’s 51% effective.

It’s nowhere near Pfizer and Moderna’s 90-plus percent efficacy rates, but Mexico needs to meet its demand. And the Biden administration recently turned down a request from Mexico to share supply.

Mexico City alone is still averaging 2,000 cases per day, though trends are moving in the right direction.

“If we are able to vaccinate people over 60 years of age soon, we will reduce covid mortality by 80%," Mexican President Andrés Manuel López Obrador said.

Mexico, betting its path to beating COVID on Chinese vaccines.