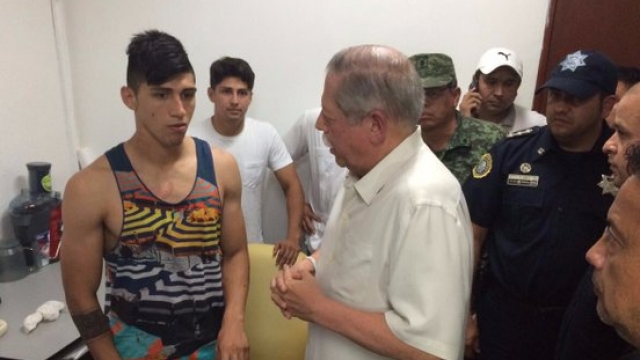 Mexico international soccer player Alan Pulido is a free man after being kidnapped over the weekend.

Officials said joint federal and state forces helped rescue Pulido just before midnight on Sunday. The 25-year-old striker was then taken to the hospital for a medical evaluation.

When he's not playing for Mexico's international team, Pulido is a member of Greek team Olympiacos F.C.

The team posted on Twitter early Monday: "Alan is safe and healthy with his family. We thank each and everyone of you for your concern and prayers in these difficult times."

Pulido was reportedly abducted by unknown kidnappers after leaving a party early Sunday morning. Local media report six masked man pulled up and surrounded the soccer player, then took him by force.

His girlfriend, who was reportedly in the car with him at the time, wasn't harmed.

The kidnapping took place in Ciudad Victoria, a city in Tamaulipas, which is a border state to Texas.

Tamaulipas has one of the highest kidnapping rates in the entire world. The government estimates 1,000 people are kidnapped every year there, but critics argue that figure could be 10 times higher.

The government said one suspect was arrested in connection to Pulido's kidnapping but didn't release any other details.