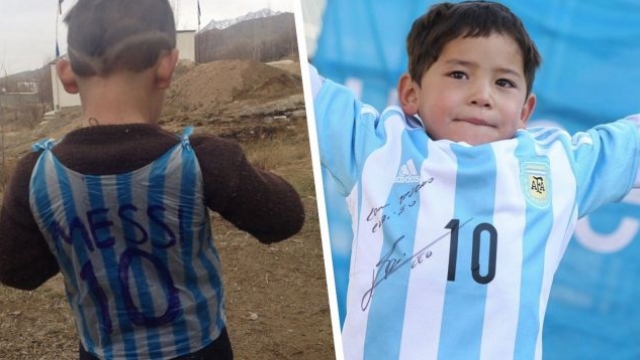 SMS
'Messi Boy' Viral Story Takes A Sad Turn As Family Flees Afghanistan
By Matt Moreno
By Matt Moreno
May 3, 2016
Murtaza Ahmadi, the Afghan boy famous for his Lionel Messi jersey made from a plastic bag, escaped his home country after his family was threatened.
SHOW TRANSCRIPT

The Afghan boy whose love for soccer phenom Lionel Messi went viral earlier this year had to flee the country.

Murtaza Ahmadi's story was heard around the world after someone snapped a picture of him wearing a makeshift Messi jersey made out of a plastic bag.

But after receiving a real, signed jersey from the international soccer star himself, Murtaza's family says life has been miserable, and they've been forced to move.

"A few days ago I got a call from a local gangster. He thought that since my son had received these T-shirts from Messi that maybe he also got money and asked for his share," his father told the BBC.

Murtaza's father called the situation "very risky" and said if they didn't leave, the boy might've been kidnapped or harmed.

The family has reportedly fled to neighboring Pakistan and is still hoping Murtaza will meet his hero someday.

This video includes clips from Unicef, Ariana TV and images from Getty Images.