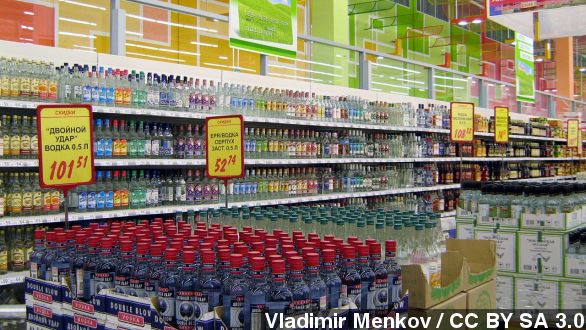 Russia’s dedicated drinkers, consider this a Christmas present from your president.

Vladimir Putin has ordered the government keep vodka prices cheap. This, as his country deals with its worst economic crisis since 1998 — the year Russia defaulted on its debt. (Video via The Kremlin)

In recent months, inflation has skyrocketed and the value of the ruble has dropped big time thanks to falling oil prices and Western sanctions. (Video via Ukraine Today)

As a result, government-regulated vodka prices are up and Russians are turning to cheaper, illegal spirits — which can carry greater health risks. (Video via Euronews)

And that’s of big concern in Russia where 25 percent of men die before they turn 55. Contrast that with only ten percent of their American counterparts. Researchers say a big reason for the difference is Russia’s culture of binge drinking.

According to Quartz, on average, Russians throw back 17.3 vodka shots per month — easily making Russians the world’s biggest drinkers of the stuff.

No surprise there. The Russian penchant for vodka goes back centuries.

This guy — Peter the Great — supposedly drank up to a half of gallon of vodka per day.

It wasn't long before it became the drink of choice — prompting various vodka bans and restrictions. (Video via YouTube / Альфа Менеджмент)

But as Mikhail Gorbachev learned in the 80s, Russians will do what it takes to get their drink of choice, even producing sometimes-poisonous vodka in the bathtub. (Via C-SPAN)

Putin says he hopes to cut down on counterfeit booze production by putting a cap on legal vodka prices. (Video via RT)

But before you toast to the Russian president, realize his move won’t make for cheaper vodka abroad. Popular vodka brands in the U.S., including Smirnoff, aren’t produced in Russia to begin with.

This video includes an image from Paul Delaroche.