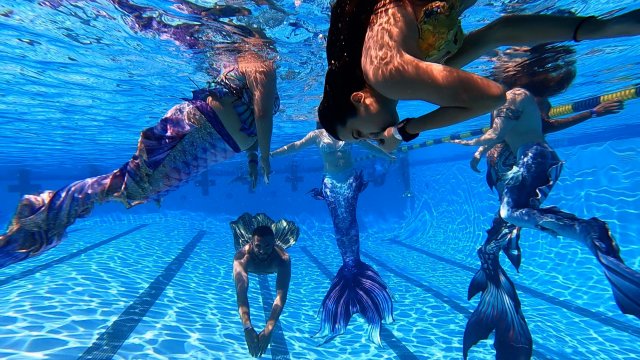 SMS
Mermaids Aren't Just Entertainers. Many Are Environmental Advocates
By Cat Sandoval
By Cat Sandoval
May 30, 2022
The Sacramento Mermaid Convention is full of merfolk, many of whom are combining fun with a passion for environmentalism.

Water, fins and a sense of adventure — the fantasy is real in Sacramento, California.

"The community is great, but for me, it was kind of like an escape, you know?" merman Onyx said. "So, don a tail, and you can go anywhere."

Merfolk of all kinds gather from across the country at the California Mermaid Convention in Sacramento to swim and celebrate all things “under the sea.”

"All mermaids that you meet will love aquatic ecosystems and animals," Echo said.

Outside their mermaid form, Echo is a wildlife specialist and a communications assistant for Wisconsin’s Department of Natural Resources.

Echo’s other identity is as an edu-tainer, or educator and entertainer, who started her own business of professional "mermaiding."

"In Wisconsin, you have to have like a 20-minute conversation with somebody to explain like, 'No, it's not crazy. I'm not a crazy person. I don't actually think I'm a real mermaid. This is a tool I use to teach kids,'" Echo said.

"I think anybody can be a mermaid," Echo said. "It's just a matter of mentality. Know you can just believe in the ocean and for caring for it, and you can be a mermaid."

The merfolk say what they do is more than playing dress-up. It's also advocating for clean water.

"Mermaids have a really unique opportunity as educators because we look approachable and friendly and fun and people want to ask questions," said mermaid Rachel, co-organizer of the California Mermaid Convention. "Then we have a platform to talk about all of these ongoing issues."

"The flashy costumes draw people's attention and make them think, 'Wow, what's going on over here, and how can I be a part of it?" said Teresa Henry, of Nerdtistic Park.

Echo teaches other educators fun ways to engage children and adults young at heart about the environment.

"A really easy thing that people can do is turn that water off when you're brushing your teeth, or you can also bring reusable bags to the grocery store," Echo said. "But more importantly than anything, remember that it's not an individual issue. It's a corporations issue."

Nearly two-thirds of global carbon emissions can be traced to 90 major companies, according to a 2017 study from the University of Oxford. The increase of carbon emissions has contributed to climate change and a rise in sea levels.

"Oceans are obviously very important, and we need to protect our coral reefs and all of our endangered animals," Echo said. "But the No. 1 most endangered aquatic system on the planet is freshwater ecosystems."

For Echo, who has a science background, mermaiding is about combining environmentalism and fun and inspiring future generations to keep swimming forward.