Merkel May Get More Time To Reach Immigration Deal 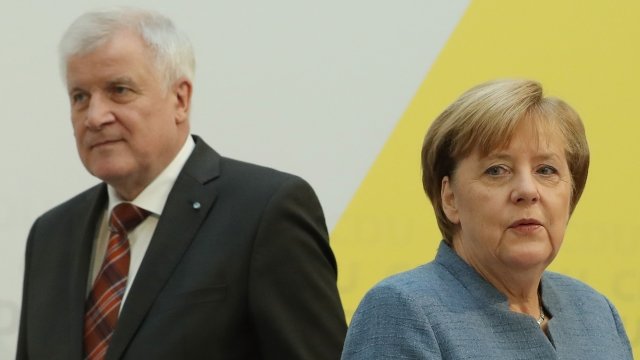 SMS
Merkel May Get More Time To Reach Immigration Deal
By Briana Koeneman
By Briana Koeneman
June 18, 2018
Interior Minister Horst Seehofer suggested that he would give Angela Merkel two weeks to reach an agreement on the issue with Germany's EU partners.
SHOW TRANSCRIPT

German Chancellor Angela Merkel may have some more time to figure out how to deal with undocumented migrants entering the country.

According to several reports, Interior Minister Horst Seehofer suggested he would give Merkel two weeks to reach an agreement on the issue with Germany's EU partners.

The dispute between Merkel and Seehofer over Germany's immigration plans has escalated in recent days.

As Newsy previously reported, Seehofer wants to impose new rules along Germany's border. His plan would allow police to turn away migrants who have already sought asylum in another EU nation. Migrants have to apply for asylum in the first country they set foot in.

But Merkel isn't on board with that plan. She says it would only put more pressure on southern neighbors like Italy and Greece and reverse her open-door policy on migrants.

If the dispute continues, Seehofer's party could leave the governing coalition or cause a confidence vote in Merkel. The coalition was formed in March after extensive negotiations that lasted months.