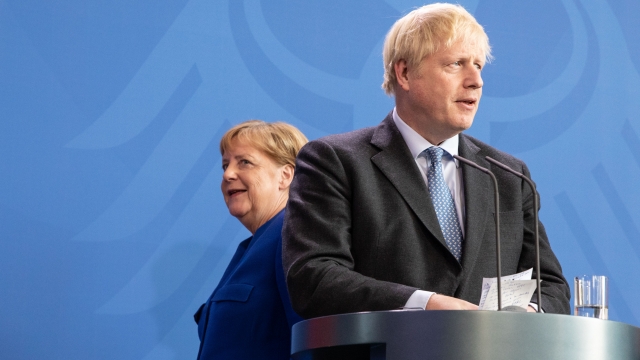 SMS
Boris Johnson Gets A New Deadline In Brexit Talks With The EU
By Matt Picht
By Matt Picht
August 21, 2019
U.K. Prime Minister Boris Johnson wants to tear up the Northern Ireland backstop as part of any Brexit deal with the EU.
SHOW TRANSCRIPT

U.K. Prime Minister Boris Johnson's Brexit outreach to the European Union is starting off with a new deadline. During a joint press conference, German Chancellor Angela Merkel challenged Johnson to come up with an alternative to the Irish border backstop in the next 30 days.

The backstop is a contingency plan to manage the U.K.'s border with Ireland after Brexit, negotiated by Johnson's predecessor Theresa May. The EU insists it's still the best option available, but Johnson has been adamant the backstop must be eliminated.

Johnson's ire stems from his stated goal of bringing the U.K. completely out of the EU. He's said that leaving the bloc's economic regulations will allow the U.K. to revitalize its economy and strike new trade deals with the rest of the world.

The backstop directly interferes with that vision of Brexit. As negotiated, it keeps the U.K. aligned with the EU's customs and trade rules until a more permanent solution is worked out. The arrangement is designed to keep Ireland's border with the U.K. free and open after Brexit.

And since the backstop can't be ended without consent from both the U.K. and the EU, there are some worries that the agreement might keep the U.K. in the EU in perpetuity. The U.K. Parliament rejected Brexit deals using the backstop three times now before Johnson took office.

But the EU isn't budging: It still maintains the backstop is a necessary measure to keep the Irish border stable. Worries about smuggling and sectarian violence have made drawing a hard border between Ireland and Northern Ireland a politically unfeasible option.

Johnson has also committed to keeping the Irish border open, but hasn't outlined a detailed plan on how to do that. A letter he sent to the European Council president called for "alternative arrangements" on the Irish border, but didn't spell out any details.

It's not clear how serious Merkel is about the 30-day-deadline, but Johnson does need to move fast. His government has a little over two and a half months to come up with a backstop solution that both the EU and the U.K. can agree to before the Brexit deadline of Oct. 31.