Menus Get Makeovers As Alternatives To Meat Grow 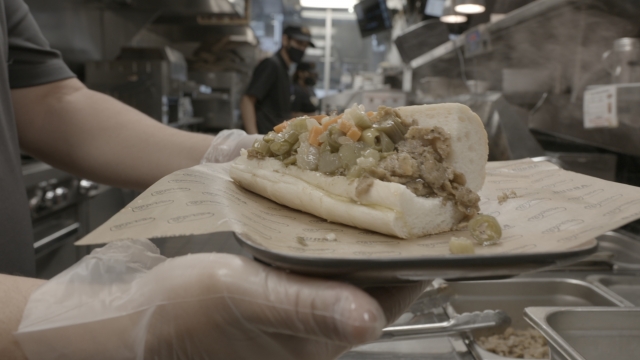 SMS
Menus Get Makeovers As Alternatives To Meat Grow
By Meg Hilling
By Meg Hilling
October 5, 2021
Restaurants like Buona Beef in Chicago are giving their menus a makeover as diners search for more plant-based options.
SHOW TRANSCRIPT

Nothing says Chicago like an Italian beef sandwich served up in places like this one — Buona Beef.

These sandwiches are said to have originated in the Windy City in the late 1930s as a way to stretch beef roasts for large gatherings. They are as Chicago as, well, the Chicago Bears.

Except this Italian beef isn't made with beef. It's almost blasphemy, but this edible symbol of the city of big shoulders is made of a plant-based substitute known as seitan.

"It was nerve-wracking. But we knew that our goal was to nail the flavor and consistently use the same flavor profile that we have from our family recipe of our Italian beef and reproduce it," said Candice Jordan, director of marketing at the Buona Companies.

Buona Beef is after a growing market as more people search menus for plant-based substitutes for meat and other ingredients.

"Our customers really were asking us for more vegetarian or vegan options," Jordan said. "We knew we had to get something on the menu that was going to be different and not something everybody else had."

According to the Plant Based Foods Association, U.S. retail sales of plant-based foods grew by 27% in 2020 alone, bringing the total market value to $7 billion.

And Buona Beef isn't alone in its race to cook up more meals with plant-based foods. Restaurant chains like McDonald's, KFC and Panda Express are also putting plant-based items on their menus.

"We needed to be innovative with this product line, and there was a huge demand for it in the marketplace," Jordan said.

One of the factors driving these menu makeovers? Flexitarians: a growing category of diners who eat predominantly plant-based foods but occasionally eat animal-based foods as well.

"We've seen a ton of flexitarians coming in getting a beef sandwich one day, the next day coming in and getting the vegan plant-based sandwich," Jordan said.

"I think it's a good idea," diner Holland Margosein said.

"I've tried some vegan things and they are pretty comparable to the original, so I'm open to trying it," diner Mitchell Sultana said.