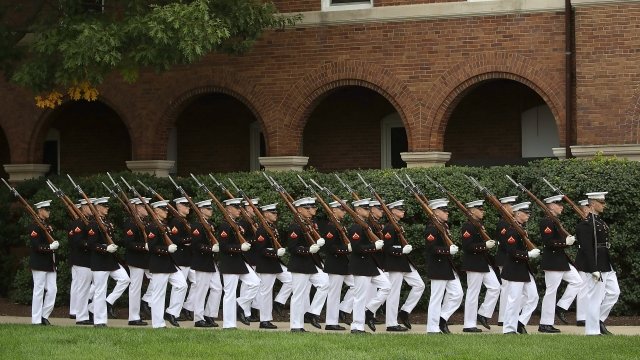 SMS
Male And Female Recruits To Train Together In A First For Marine Corps
By Alec Larson
By Alec Larson
January 6, 2019
The corps isn't rewriting its training policy just yet, though.
SHOW TRANSCRIPT

A group of woman recruits will go through boot camp alongside men for the first time in U.S. Marine Corps history.

On Saturday, about 50 female recruits began training with a traditionally all-male battalion at Parris Island, South Carolina. The Marine Corps has the lowest percentage of women of all U.S. military branches, and it's the only branch that separates men from women in basic training.

Women in the battalion will still have female drill instructors and live separately from the men. Interaction between the male and female platoons will mostly be limited to larger training exercises.

This historic first for the Marines is not part of a permanent change in training policies just yet, but NBC News reports the corps will evaluate the session's results in 13 weeks.