Suing Women-Only Spaces In The Name of Men's Rights 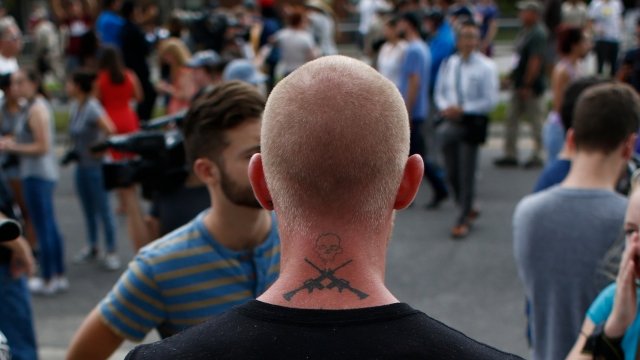 Want to hear the internet explode? Talk about "men's rights." But the movement is real. Activists have shifted into high gear with legal challenges to women-focused companies, university groups and civic projects. It's #HeToo in the age of #MeToo.

Many of the activist leaders are affiliated with the National Coalition For Men. Its mission statement: "Since 1977, NCFM has been committed to ending harmful discrimination and stereotypes against boys, men, their families and the women who love them. We are a gender inclusive, nonpartisan, ethnically diverse organization that effects civil rights reform through advocacy, education, outreach, services and litigation."

There have been challenges for decades, but the uptick in the past couple of years seems to be linked to an increase in women-only efforts — like work collectives — and the #MeToo movement, which was energized by high-profile cases involving allegations of sexual assault and harassment.

Here's a breakdown of some of the recent challenges from #HeToo:

Yale and USC are under federal investigation for programs that are exclusively for women.

A group to get more women on the golf course shut down after settling with a plaintiff for holding women-only events.

The head of Chic CEO, which hosted online resources for women, downsized her company after settling a lawsuit alleging the group excluded men from networking events.

The Wing, an exclusive all-women co-working and social space, is under investigation by the New York City Commission on Human Rights for gender discrimination.

One of the highest-profile targets is Ladies Get Paid. It's an organization to swap career and leadership tips. It hosted events in San Diego and Santa Monica advertised as being for women, including trans women, as well as non-binary individuals. No men allowed. Ladies Get Paid was sued for both events, decided to settle the cases and now faces tens of thousands of dollars in legal fees.

The founder said she was "stunned" and "never once thought what I was doing was controversial or offensive." An associate of NCFM, Alfred G. Rava, represented the men who brought the suit in California and has handled some 300 other cases, many of them filed under the state's Unruh Civil Rights Act. It outlaws discrimination based on a range of reasons, including sex, race, color, religion and sexual orientation. Barring men because of their sex fits the bill, says NCFM.

Opponents call these lawsuits a distortion of the California law. At their core, activists are battling for legal and cultural wins, and the stakes couldn't be higher. But the men are keeping at it. Can #HeToo and #MeToo coexist?