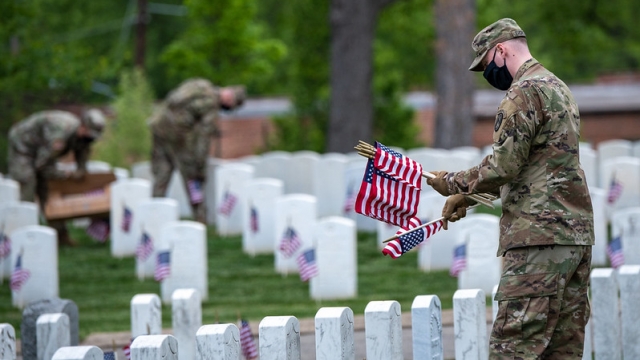 Old Guard Soldiers placed flags at headstones in Arlington National Cemetery Thursday, one of the few sites keeping with tradition this Memorial Day weekend. But even at Arlington, only family members visiting grave sites will be allowed inside.

The holiday will look anything but typical as the country continues to grapple with the effects of COVID-19.

Many parks remain closed so the traditional gatherings with families and friends will need to adapt.

"Unless you can really limit the number of people or have social distancing involved, the option may be to celebrate virtually," said Dr. Preeti Malani, Chief Health Officer, University of Michigan.

Virtual seems to be the plan nationwide when it comes to honoring our fallen members of the military.

The National Memorial Day concert, where crowds typically fill the U.S. Capitol Lawn, will instead be streamed via Facebook and Youtube.

In New York and abroad, local leaders are encouraging vehicle parades in lieu of the traditional gatherings.

"This is an important tradition. Many people lost their lives. This is important to many, many families,” said New York Governor Andrew Cuomo.

And a prerecorded TV special will replace the National Memorial Day parade which usually fills Constitution Avenue in Washington, DC.

A White House official said President Trump, First Lady Melania Trump and Defense Secretary Mark Esper will be among the officials attending a Memorial Day event, in person, at Fort McHenry in Baltimore. The mayor of Baltimore has asked the president not to come, citing stay-at-home orders.