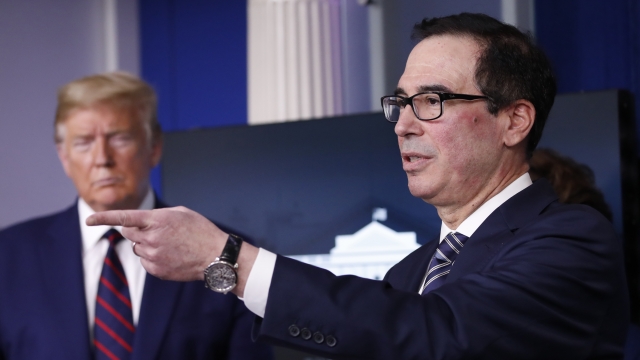 SMS
Memo: Some Americans May Not Receive Coronavirus Aid Until August
By Adam Elrashidi
By Adam Elrashidi
April 3, 2020
The federal government expects to issue 60 million coronavirus relief payments starting this month, but checks for others could be delayed for months.
SHOW TRANSCRIPT

The Trump administration says millions of people in the U.S. can expect to receive coronavirus relief payments starting the week of April 13. But some relief checks may not arrive until much later.

That's according to a memo circulated by House Democrats based on conversations they've had with the White House and IRS officials. The memo estimates the government will issue 60 million payments this month to people with direct deposit information on file.

The IRS will then start issuing paper checks — a process that could potentially delay payments until mid-August because of printing capacity. The Treasury Department plans to build a web portal for people without direct deposit to submit their information.

The payments are part of a $2 trillion stimulus package signed by President Trump last month. The package intends to offset the economic damage caused by the coronavirus pandemic.

The measure stipulates up to $1,200 for eligible taxpayers, plus $500 per child. Treasury Secretary Steve Mnuchin had previously suggested payments would be ready by April 6.