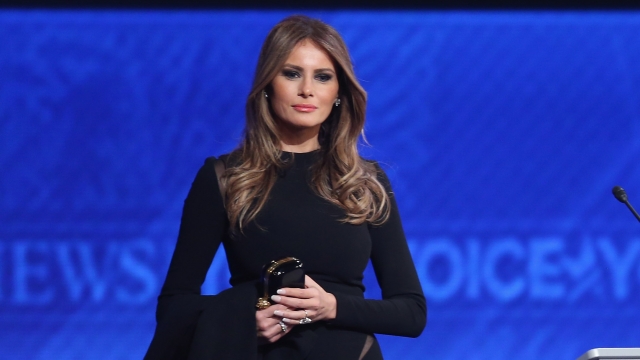 SMS
Melania Trump Officially Denies Being Married To Hitler
By Eugene Daniels
By Eugene Daniels
May 17, 2016
A profile of the potential first lady is just chock-full of weird nuggets that completely fit this weird election year.
SHOW TRANSCRIPT

Political spouses are probably the best surrogate a candidate can have. They help humanize the candidate, give great insight about their character and apparently reassure everyone the candidate isn't a German dictator.

At least, that's what happens when you're married to Donald Trump. A profile of the de facto GOP nominee's wife, Melania, proves if you thought we'd heard all the weird tidbits we could handle this election year, you were very, very wrong.

Melania's interview with DuJour magazine gave us more than a few little nuggets. Including the time Michael Jackson told her to kiss him to make The Donald jealous, how the Clintons skimped on giving the Trumps a wedding gift in 2005. Oh, and she denied comparisons of her husband to Hitler but does concede he should say things "in a softer way."

She also criticized people like Chris Matthews who have something to say about her beauty. Matthews was recently caught on a hot mic talking about the way Melania walked. She told the magazine: "I’m not only a beauty, I’m smart. I have brains. I’m intelligent. I would just say, 'Men will be men.'"

Until recently, Melania has shied away from the public eye. But the new scrutiny has been anything but easy to take. She made headlines last month after criticizing a GQ profile piece that had information about her family, calling it "a little bit nasty."