Tiffany & Co. Has Quite A History With The White House 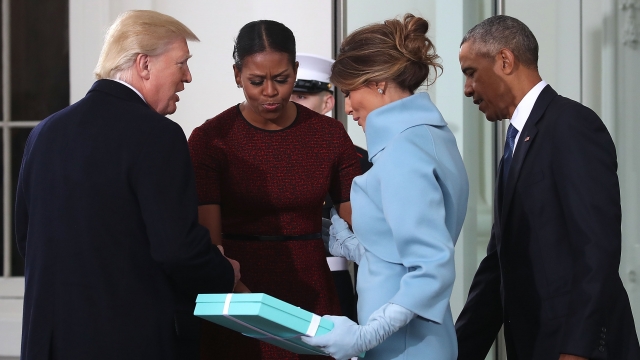 It led to a now-viral moment in which the departing first lady awkwardly seemed to have no idea where to put the gift while the two couples took a photo together.

Various news outlets asked the jewelry company exactly what the gift was, but the company declined to say.

But Tiffany & Co. — probably most known for its signature robin's egg blue packaging — has a long history with the White House.

President Abraham Lincoln gave a set of pearl jewelry to his wife, Mary Todd Lincoln, for his inauguration in 1861.

Tiffany also redesigned the Great Seal of the United States in 1885. Its version of the seal can be seen on the $1 bill.

And President Lyndon B. Johnson and his wife, Lady Bird Johnson, commissioned Tiffany to create their White House china.

Many are speculating about what Trump could have given to Obama — but we'll point out the box is more suitably sized for a frame than it is for jewelry.