Meeting About Rosenstein's Fate Trump's DOJ Gets Pushed Back 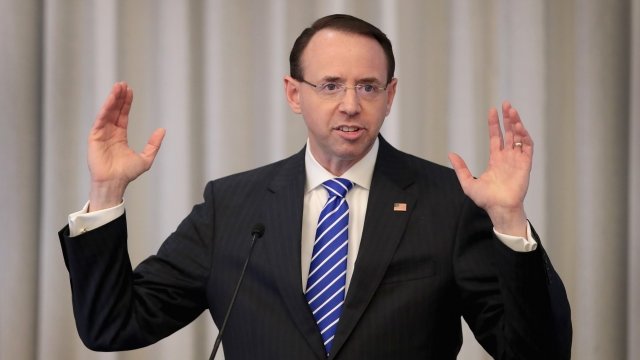 A meeting that was set to take place between Rosenstein and President Donald Trump has been pushed back.

The White House said it was postponed because the President doesn't want it to interfere with Thursday's hearing about allegations against Supreme Court nominee Brett Kavanaugh.

The meeting was originally set up Monday, days after a New York Times report claimed Rosenstein considered secretly recording Trump, and discussed invoking the 25th amendment to have Trump removed from office. Rosenstein's denied the report.

During a press conference Wednesday, the President suggested Rosenstein's fate may be favorable.

"I am talking to him, we've had a good talk, he said he never said it, he said he doesn't believe it, he has a lot of respect for me. He was very nice, and we'll see. He's a member of Trump administration, in that sense, it's the Justice Department. I would certainly prefer not doing that," Trump said.

According to White House press secretary Sarah Sanders, the two have spoken about postponing the meeting and plan to meet next week.