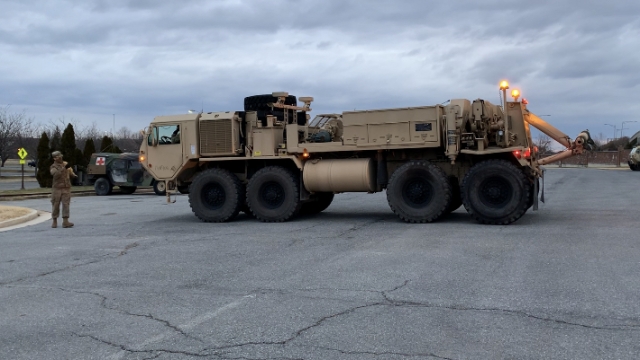 You may have seen all the security checkpoints around the Capitol. What you don't see: The people making sure military vehicles stay mission-ready.

There are many security checkpoints around the Capitol, and as you can see behind me, they are armed. But what you don’t see are the men and women that  are working behind the scenes to make sure the National Guard is able to actually get around the city.

“Its powerful. So powerful. Not many people see a woman that drives a vehicle this big," Navarro said.

Yep, that’s her behind the wheel of what they call “the Wrecker.”

“It's awesome. I think it's a very huge responsibility on us, as well," Navarro said.

Her unit deployed to D.C. with more than 300 vehicles after the insurrection. Any vehicle that breaks down from the 16 states deployed to the area, they are in charge of fixing and maintaining.

“We have to make sure that all the vehicles that leave the Guard are good to go, whether that be make a sudden turn-on, making sure other flows are topped off, making sure they have either flow. It's really cold outside; we don't want our guys to be shivering outside and not be able to come back into the warmth of the vehicle," she added.

Navarro is the only woman from the Pennsylvania National Guard towing vehicles across the Capitol -- something she never thought she would ever do, especially during an inauguration.

This specialist is checking all the boxes as the first woman in her family to join the military and get a college education.

“Younger sister, 11 years old now. I didn't really have that person who joined the military and went to school. I come from a long line of construction workers. I want to be that role model for my sister,” Navarro told Newsy.

We’re expecting up to 25,000 guardsmen here on the streets of D.C. this week, meaning she and others in her unit will be working nonstop to make sure every vehicle is mission-ready.