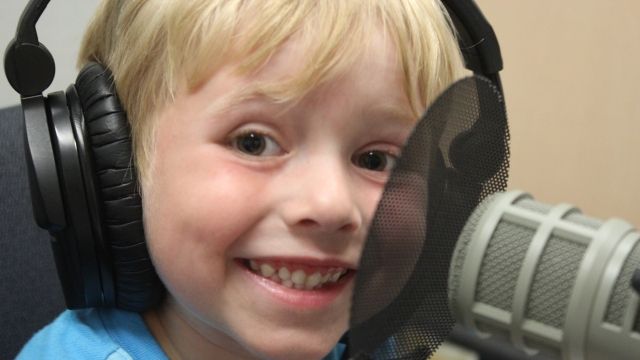 SMS
Meet The Cutest 6-Year-Old Podcaster Who Will Teach You About Science
By Cody LaGrow
By Cody LaGrow
April 6, 2017
First-grader Nate Butkus loves to talk about topics that many people first learn about in college.
SHOW TRANSCRIPT

Nate loves science and hosts a podcast. It has a name that gets right to the point: "The Show About Science." (It caught Ellen DeGeneres' attention and got him a spot on her show earlier this year.) His mission is to teach the world cool things about the field.

I got to hang out with Nate in his studio on a day the first-grader was set to interview another probable genius, MIT's Kevin Esvelt, about one of Nate's top interests: CRISPR.

"It stands for clustered regularly interspaced short palindromic repeats," Nate explains. "And it's basically, say, I take this blond hair, and I wanted to turn it into red hair. I'll just go snip snip with the blond hair gene and replace that with the red hair gene."

Gene-editing is a double-edged sword, and Nate was quick to recognize why it's a controversial topic.

"Well it's scary because we'll all have the same gene, but it's cool because we can edit people the way we want to," Nate elaborates. "If you have hemophilia, you'll definitely want to use a gene drive to make sure none of your children will have hemophilia."

The interview lasted about as long as the attention-span of a 6-year-old would allow. In between speaking with Newsy and Esvelt, Nate conducted an experiment in his lab, showed off his most prized possessions and asked LaGrow to read to him a Stalin-era Russian fiction novel titled "The Master and Margarita."

Nate's interview with Esvelt lasted roughly 25 minutes. Although Eric, Nate's dad, assisted with the production while his mom, Jenny, watched on, Nate ran the show. It was incredible to watch him in action, and it made me wonder what this dynamo wanted to do in the future.

He seemed to know it was awesome that he was already so focused, but Nate was quick to remind me he was still only 6 years old.

"It's so cool to have like two cameras in my face," he says, chuckling.