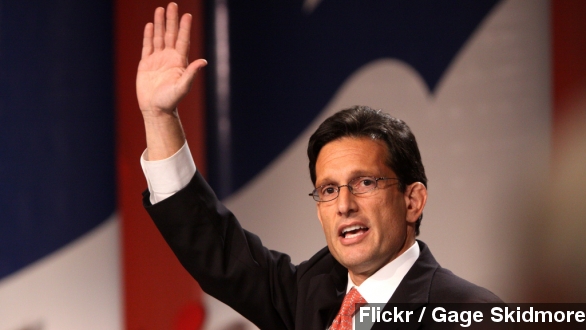 SMS
Meet The Republicans Vying For Cantor's House Leader Spot
By Ben Levin
By Ben Levin
June 11, 2014
With the announcement that Cantor will step down as majority leader following his primary defeat, several frontrunners have emerged to claim the job.
SHOW TRANSCRIPT

The stunning upset of Eric Cantor in Tuesday's GOP primary has ignited a behind-the-scenes race within the House Republican Caucus for the position Cantor will be giving up: House majority leader. (Via Flickr / Gage Skidmore)

The loss of Cantor, who has announced his intention to step down as the House's number two at the end of July, opens a leadership vacuum in Congress that many Republicans are more than eager to fill. House GOP lawmakers will vote on his replacement June 18.

Kevin McCarthy, currently the House majority whip, is widely seen as the front runner for majority leader. McCarthy, a California Republican, is popular within the caucus and has been endorsed by Representative Cantor. (Via House Republicans)

CANTOR: "If my dear friend and colleague Kevin McCarthy does decide to run, I think he'd make an outstanding majority leader." (Via CNN)

Yet some Republicans consider him stained by his close ties with Speaker John Boehner and the unpopular Republican leadership, which opens the door to a slew of other candidates. (Via NBC)

Jeb Hensarling, another Texas firebrand known for his close ties with the Tea Party, is also emerging as a challenger. He could even be a candidate to replace Boehner as Speaker after November's elections. (Via C-SPAN)

Former vice presidential candidate Paul Ryan, on the other hand, says he won't pursue the majority leader spot. Robert Costa of The Washington Post quotes him as saying "My mind has not changed and I will not seek a leadership position".

Representative Cathy McMorris Rodgers, the highest ranking woman in the Republican caucus, has also declined. In a statement given to Talking Points Memo, she said, "I have decided to remain Conference Chair at this time"

The issue of "amensty" — the prospect of granting citizenship to millions of immigrants who crossed into the U.S. illegally — has become a flashpoint in the war between establishment and Tea Party Republicans. (Via Wikimedia Common / U.S. Representative Phil Gingrey)

And Cantor's loss is seen by many in Washington as a result of his challenger's, Dave Brat, successful efforts to paint Cantor as "pro-amnesty."

Despite Cantor's insistence that he is anything but. (Via Fox News)

"Rather than to bring up this whole amensty bill that the senate is proposing which I am against."

Regardless, at the beginning of the year, the issue of immigration seemed ripe ground for bipartisan progress. And Cantor's defeat is perhaps the final nail in the coffin for hopes of reform in 2014. (Via Politico)