Meet the 20-Year-Old Woman On Her Second Pacemaker 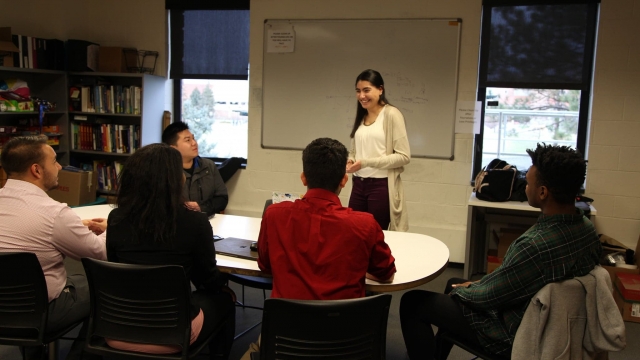 SMS
Meet the 20-Year-Old Woman On Her Second Pacemaker
By Lindsey Theis
By Lindsey Theis
February 21, 2019
More and more children born with a congenital heart defect are growing into adulthood. What's the medical community doing to care for & monitor them?
SHOW TRANSCRIPT

The CDC says 1 in every 4 deaths in the U.S. is from heart disease, making it the leading cause of death for both men and women. For February, national heart month, Newsy is looking at stories of unlikely young patients who are sharing their stories to bring awareness to heart health.

One such person is Sofia Montoya, 20. Even before she was born, Montoya’s heart health would shape who she was. Unlike most heart disease patients, Sofia was born with a rare heart condition, Holt Oram syndrome. According to the CDC, about one percent of babies are born with congenital heart disease each year in the U.S. Dr. Reggie Washington, who now runs the Rocky Mountain Hospital for Children, was Sofia’s cardiologist.

"We realized then that she had some potential problems. She had a hole in her heart. She had some issues with her gastrointestinal system — her intestines were all mixed up in her and so forth. Heart was on the wrong side. She also had some abnormalities of her arm and her fingers on one side," he explained. "Her intestines had to be looked after first, and then several months later we could fix her arm and her fingers so she could have function there, and then we finally fixed her heart."

For the first five months of her life, Sofia was in neonatal intensive care, growing and getting stronger before doctors could repair the hole in her heart. A week after that, she went home. After that, other than the regular cardiologist checkups, she didn’t visit the hospital.

"Holt-Oram patients generally if they — I shouldn't say generally. A lot of them develop irregular heart rhythms and sometimes require pacemakers as they get older, and that was the case with her. So the first several years of her life, till she became a teenager, she didn't have any issues with her heart rhythm, but she finally did and had to have a pacemaker, and she'll have to have a pacemaker the rest of her life," Dr. Washington told Newsy.

"When I was 7 I didn't know anyone else that had to get a pacemaker, you know. I've had relatives who've gotten pacemakers, but they're much older than I was. That pacemaker should last me about another five years and then I'll need another one. But with technology, who knows by then, you know, what they're going to come up with?" Montoya told Newsy.

"Our ability to care for these children has really advanced. And the techniques we use and the medications that are available and our knowledge of how to treat these patients effectively has really advanced. It's an interesting problem that we didn't used to have because a lot of patients wouldn't survive into young adulthood. But now the majority of kids who are born with congenital heart disease, even if they've had to have surgery, survive well into adulthood," Dr. Washington said.

The CDC says while several states track congenital heart defects among newborns and young children, there’s no system tracking those kids as they grow up. But as more and more of these patients get older, hospitals like Washington’s are investing in doctors with a new specialty discipline called adult congenital heart disease.

As for Sofia, she’s now a sophomore in college studying business. She wants to go into marketing, maybe for a hospital, she says. And while she says she’s had to adapt in some ways throughout her life, she’s stayed incredibly positive. She’s also doing her part to reach the estimated 1.4 million U.S. adults who live with congenital heart disease. In 2019, the American Heart Association chose her as a national spokesperson. She says it’s important for her to share her story with her peers.

"I've always remembered that it's not, ‘why me?’. Never feel sorry for yourself because there's always someone who's having to deal with a lot more than you ever could," she said. "Even though I am getting older, I feel like my story is still connected to a younger generation. And so I hope that I can continue to do that. Thinking about your heart health is good at any age because we all have hearts. We all need to take care of them. You know, I think it's just as important as taking care of any other organ in your body"