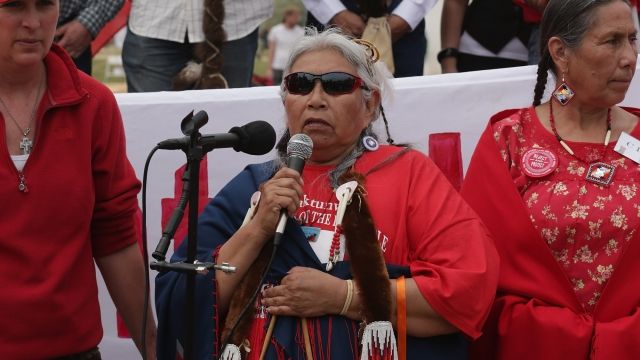 Faith Spotted Eagle is the first Native American to get an Electoral College vote for President.

A faithless elector cast a vote for Spotted Eagle in Washington state.

Spotted Eagle has been a leader in the fight against pipelines like Dakota Access and Keystone XL. While she got one electoral vote, third-party candidates Gary Johnson and Jill Stein got zero.

"I was totally in shock," Spotted Eagle said. "It just took me a minute to comprehend it, and in fact, I thought it was fake news."

"I think the prayers that are traveling out of Standing Rock are touching those across the world," Spotted Eagle said. "If you don't have a house, you're not going to be able to survive, and Mother Earth is our teepee, so we've got to take care of it."

"This is an indigenous-centered movement, but we've been privileged to lead it, and it's really beyond words sometimes. It's all about spirit," Spotted Eagle said. "I'm just one of 10,000, and there are many people that have stories to tell, and every one of them was crucial ... especially the Standing Rock people ... . I give them thanks, put up my hands to them today."