Meet Dreadnoughtus, One Of The Most Enormous Animals Ever 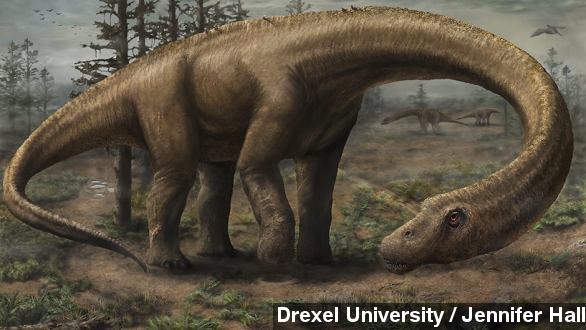 Scientists officially announced the discovery of a new dinosaur Thursday, and if there's one takeaway here, it's that this thing was huge.

Ken Lacovara via Drexel University: "Everything about this dinosaur is giant: the femur is six feet tall, the upper arm bone, the humorous, is almost as tall as I am, the tail bones are gargantuan with huge muscle scars."

The team at Drexel University — which coincidentally has another huge lizard as a mascot — spent four years unearthing the bones of the huge dinosaur, which they named Dreadnoughtus, meaning it feared nothing.

We first heard about the colossal dinosaur in May. Back then, it hadn't been given a name and the analysis of the bones wasn't complete, but it was being touted as a contender for largest land animal ever. (Video via BBC)

They've revised their early estimates down a little bit since then, but plenty of stories about the discovery still call Dreadnoughtus the largest dinosaur ever.

WPVI: "At 85 feet long, weighing in at 65 tons, it is the largest prehistoric animal to ever be discovered."

KYW-TV: "What has a tail that stretches around a room and a leg bone taller than most men? Only the biggest land animal to ever grace this earth."

Well, maybe. The researchers themselves don't claim this is the biggest land animal ever found. There are a few other contenders for that title.

Another species, which lived in the same region around 20 million years before Dreadnoughtus, could be upwards of 100 tons.

And back in the late 1800s, bones from another much older species hinted at a body weight of 122 tons, though those bones have since been lost.

What the researchers do say is that Dreadnoughtus is "the most complete skeleton ever found of its type." They've managed to unearth over 70 percent of its skeleton while those other two species are known from only a few bones.