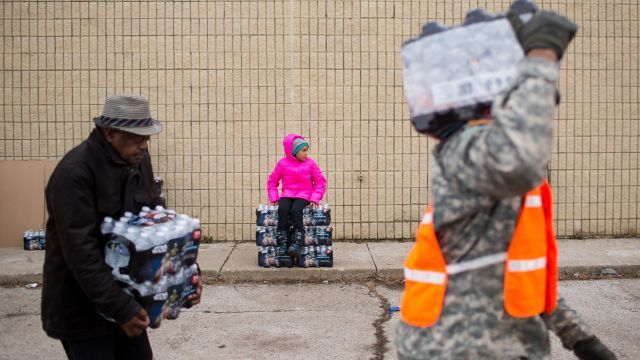 Donations of money and water are pouring into Flint, Michigan, in response to the city's water crisis. (Video via WXYZ)

A lot of celebrities are leading the way. Take Jimmy Fallon, for instance. He tweeted Sunday pledging to donate $10,000 and asked for 10 friends to match him.

Rock band Pearl Jam worked with partners to donate a total of $300,000 to the cause. Live Nation, William Morris Entertainment and Republic Records reportedly helped raise more than half of that.

But not everyone is doling out cash. Others are giving the gift of clean water.

More than 180,000 bottles of water were distributed in Flint thanks to actress and singer Cher.

The Detroit Lions also pitched in. Ezekiel Ansah and some of his teammates helped unload a donated 94,000 bottles of water.

Anheuser-Busch is sending water to the city, too. About 51,000 cans of it in total.

These donations will help, but the situation in Flint is still serious. For months, the nearly 100,000 residents who live there may have been exposed to elevated lead levels in the city's water.

President Obama has declared a state of emergency, lawsuits are filed and federal agencies are investigating who's at fault.