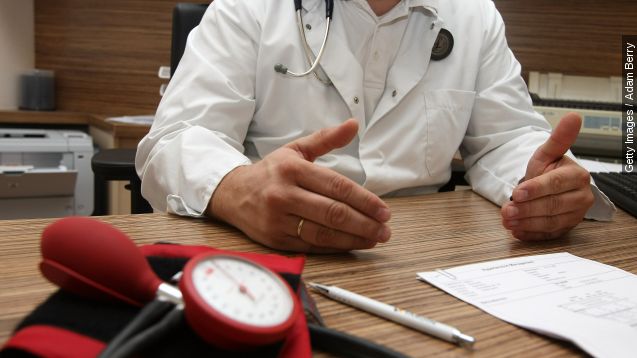 SMS
Medicare Update Focuses On End-Of-Life Discussions
By Jake Godin
By Jake Godin
July 9, 2015
A proposed Medicare plan would pay doctors to talk to their patients about the end of their life.
SHOW TRANSCRIPT

There's a new plan for how much money physicians will receive as a part of Medicare and it's stirring an old debate over so-called "death panels."

"And they would be deemed incompetent having not read the law to understand that death panels are a part of this atrocity," said former Alaskan Gov. Sarah Palin on Fox News.

Of course we're not actually talking about death panels here.

The Centers for Medicare and Medicaid Services released its proposed policy changes for 2016 and, among them, is a reimbursement system for something called "advance care planning."

The CMS gives the example of a 68 year-old man with heart failure and diabetes who's on multiple medications.

Essentially, advance care planning allows a patient to plan ahead in case they become too sick to make their own decision or their condition worsens. (Mercer University School of Medicine / Alan Stecker)

As The Washington Post points out, it doesn't change much from the kind of conversations doctors already have with their patients, except now they'll be paid for it. And that, a medical professor told the paper, makes the conversation more valuable.

Medicare currently covers more than 50 million Americans, most of whom are elderly.