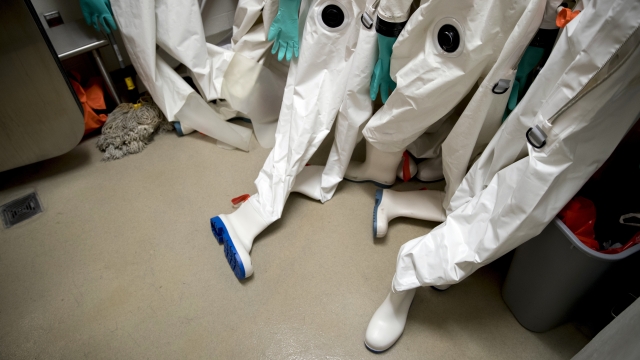 In Maryland, an elite shop of specialists pore over material collected by America’s spy agencies, from satellite images to information gleaned on the ground. The work happens at the National Center for Medical Intelligence.

"In addition to our epidemiologists, our veterinary epidemiologists, we had virologists, microbiologists and toxicologists, molecular cellular biologists, every '-ologist' you can imagine, almost," says Denis Kaufman, a former senior intelligence officer at the center.

It’s not exactly James Bond in a lab coat.

"The bulk of information that comes to medical intelligence is found openly, all around the world. It's just generally other people aren't looking for it," says Martha "Rainie" Dasch, a former National Center for Medical Intelligence analyst.

Since the Spanish flu in World War I, the U.S. recognized its value, and efforts later began. In 1982, the center was established under a different name at the Defense Intelligence Agency.

Analysts there make medical sense of what spies may not fully understand. Their assessments on foreign health threats and capabilities reach the highest members of the military and government. But because of the coronavirus pandemic, the secretive operation is getting a lot of attention.

"Had the warnings been heeded — the warnings were given, and had they been acted on, we might have dodged this bullet, or at least some of it," says Kaufman.

A former intelligence analyst tells Newsy pandemic warnings came every year, but the cost of the proposed preparations outweighed the likelihood of the disaster.

Former medical center staff say their colleagues are assessing the ability of foreign governments, like China, to get the virus under control, and whether their reporting is reliable.

"A lot of times countries are not really willing to talk about their shortfalls so much as they want to tell you how great they are," says Dasch. "Many countries report what people want to hear or what their bosses will allow them to report, or they may even not have the capability to report."

The intelligence community is facing another looming question: how COVID-19 began.

"Since January I’ve said it seems to be highly coincidental that this very contagious virus originated just a few hundred yards, or maybe a couple miles, from laboratories where the Chinese Communist Party researches coronaviruses," Sen. Tom Cotton said in an interview.

“If it was a mistake, a mistake is a mistake. But if they were knowingly responsible, yeah, then there should be consequences," President Donald Trump said in a White House press conference.

Chinese officials and the Wuhan National Biosafety Laboratory have rejected the accusation, calling it a conspiracy theory.

"There is no way this virus came from us. We have a strict regulatory regimen and code of conduct of research, so we are confident," said the director of the lab.

A U.S. intelligence official tells Newsy they are actively tracking down every piece of information they receive on the topic and that the intelligence community “has not collectively agreed on any one theory.”

But the pandemic has already impeded the Medical Intelligence Center’s main goal of protecting the armed forces: The aircraft carrier USS Theodore Roosevelt, a pillar of the country’s Pacific defense, has been docked in Guam for weeks after the virus swept the ship.

"If there were a crisis, say, in North Korea or in Taiwan or anywhere else in the Pacific, that is a piece of our defense allotment that is not available to respond because of coronavirus," says Kaufman.