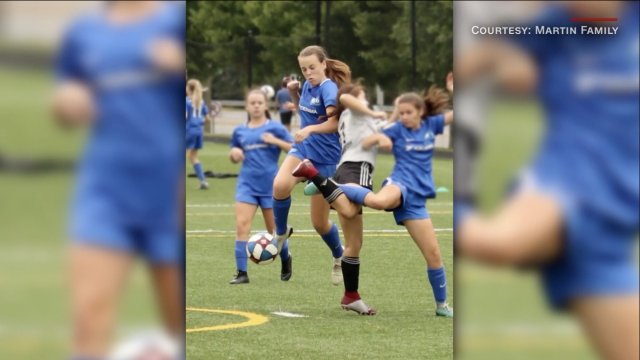 SMS
Medical Advances Help Teen Get Back Onto The Field

"Soccer has always been the thing in my life."

If you think a sport can't inspire -- a picture can't empower -- Joey Martin can prove you wrong.

About eight months ago -- this 15-year-old started getting headaches. At first -- told it was migraines -- but a CT scan later revealed a tumor on the stem of her brain. through emergency surgery -- to intensive care -- then rehab -- this picture hung in every hospital room -- a beacon on her darkest days.

Martin said, "I did not want to have played my last soccer game and not have gotten to really relish that in the past."

Side effects from therapy may have sidelined Joey, but a type of antibody was discovered and used to cut off the blood supply to her tumor, helping it to shrink.

Dr. Douglas Graham, Chief of the AFLAC Cancer and Blood Disorders Center at Children's Healthcare of Atlanta said, "We have advances now that we're curing children not only with better and more effective therapies, but we're doing it in a way that's less toxic and has less side effects to the patient."

Every second of her fight against cancer, Joey dreamed of getting back on the field. Last month, it became reality.

She said, "It's just really enjoying every minute on the field and not taking that for granted."

Her parents said, "What she's done is a miracle. it's an absolute miracle."