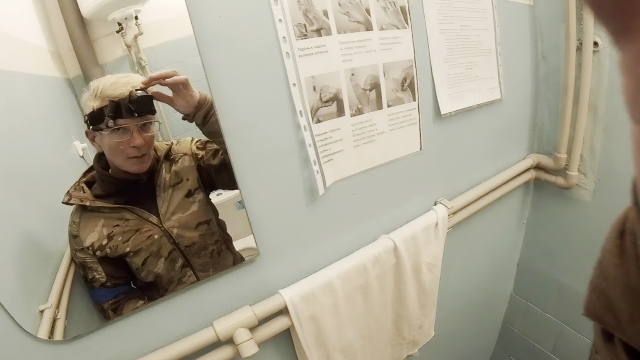 A celebrated Ukrainian medic recorded her time in Mariupol on a data card no bigger than a thumbnail, smuggled out to the world in a tampon. Now, she is in Russian hands, and Mariupol itself is on the verge of falling.

Yuliia Paievska, who as medic went by Taira, used a body camera to record 256 gigabytes of footage on her team's frantic efforts over two weeks to bring people back from the brink of death. She got the harrowing clips to an Associated Press team, the last international journalists in the Ukrainian city of Mariupol, as they left in a rare humanitarian convoy.

Russian soldiers captured Taira and her driver the next day, March 16, one of the many forced disappearances in areas of Ukraine now held by Russia. Russia has portrayed Taira as working for the nationalist Azov Battalion, in line with Moscow's narrative that it is attempting to "denazify" Ukraine. But the AP found no such evidence, and friends and colleagues said she had no links to Azov.

The military hospital where she led evacuations of the wounded is not affiliated with Azov. And the video she recorded showes Taira trying to save wounded Russian soldiers along with Ukrainian civilians.

A March 10 clip shows two Russian soldiers are taken roughly out of an ambulance by a Ukrainian soldier. One is in a wheelchair. The other is on his knees, hands bound behind his back, with an obvious leg injury.

A Ukrainian soldier curses at one of them. "Calm down, calm down," Taira tells him.

A woman asks her, "Are you going to treat the Russians?"

"They will not be as kind to us," she replies. "But I couldn't do otherwise. They are prisoners of war."

Taira, 53, is now a prisoner of the Russians, like hundreds of local officials, journalists and other prominent Ukrainians who have been kidnapped or captured. The U.N. Human Rights Monitoring Mission in Ukraine has recorded 204 cases of enforced disappearances, saying that some victims may have been tortured and five were later found dead.

The Russians have targeted medics and hospitals even though the Geneva Conventions single out military and civilian medics for protection "in all circumstance." Russian soldiers accused a woman in a convoy from Mariupol on May 8 of being a military medic and forced her to choose between letting her 4-year-old daughter accompany her to an unknown fate or continuing on to Ukrainian-controlled territory. The mother and child ended up separated.

Taira's situation and what it reveals about the Russia's treatment of Ukrainian prisoners take on new significance as Mariupol's last defenders are brought to Russian-held areas. Russia says more than 1,700 Ukrainian fighters holed up at a steel mill surrendered this week, while Ukrainian officials said the fighters came out after accomplishing their mission.

Ukraine's government says it tried to add Taira's name to a prisoner exchange weeks ago. But Russia denies holding her, despite her appearance on television networks in the separatist Donetsk region of Ukraine and on the Russian NTV network, handcuffed and with her face bruised.

Taira is known in Ukraine as a star athlete as well the person who trained the country's volunteer medic force. The video she took from Feb. 6 to March 10 provides an intimate record of a city under siege that has since become a worldwide symbol of the Russian invasion and Ukrainian resistance.

On Feb. 24, the first day of the war, Taira chronicled efforts to bandage a Ukrainian soldier's open head wound.

Two days later, she ordered colleagues to wrap a wounded Russian soldier in a blanket. She calls the young man "Sunshine" — a favorite nickname for the many soldiers who passed through her hands — and asks why he came to Ukraine.

"You're taking care of me," he tells her, almost in wonder. Her response: "We treat everyone equally."

Later that night, two children — a brother and sister — arrive gravely wounded from a checkpoint shootout. Their parents are dead. By the end of the night, despite Taira's entreaties to "stay with me, little one," so is the little boy.

Taira turns away from his lifeless body and cries. "I hate (this)," she says.

Throughout the video, she complains about chronic pain from back and hip injuries. She cracks jokes. And always, she wears a stuffed animal attached to her vest to hand to any children she might treat.

On March 15, a police officer handed the small data card to a team of Associated Press journalists. Taira asked the journalists over a walkie-talkie to get the card safely out of Mariupol. The card was hidden inside a tampon as the journalists passed through 15 Russian checkpoints.

The next day, Taira disappeared with her driver Serhiy.

A video aired on a March 21 Russian news broadcast announced her capture. In it, she looks groggy and haggard as she reads a statement calling for an end to the fighting. As she speaks, a voiceover derides her colleagues as Nazis.

With a husband and teenage daughter, Taira knew what war can do to a family. At one point, an injured Ukrainian soldier asked her to call his mother, and she told him he would be able to call himself, "so don't make her nervous."

"Accusing a volunteer medic of all mortal sins, including organ trafficking, is already outrageous propaganda — I don't even know who it's for," he said.

Taira was part of the Invictus Games for Ukraine. She received the body camera last year to film for a Netflix documentary series on inspirational figures being produced by Britain's Prince Harry, who founded the Invictus Games.

Instead, she filmed war footage. In the last video Taira shot, she is seated next to the driver who would disappear with her. It is March 9.

"Two weeks of war. Besieged Mariupol," she says quietly. Then she curses at no one in particular, and the screen goes dark.