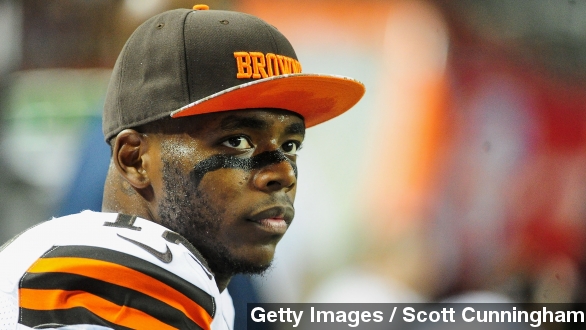 There hasn't been any shortage of reactions to Cleveland Browns wide receiver Josh Gordon's off-the-field troubles, which include arrests and suspensions for both marijuana and alcohol dating back to his days at Baylor University.

"Josh Gordon is going to die if he keeps going on this road he's going," Charles Barkley said.

But Tuesday, Gordon attempted to take control of the narrative about him, penning an essay to set the record straight — more or less.

In the essay, Gordon takes specific aim at NBA Hall-of-Famer Charles Barkley, ESPN commentator Stephen A. Smith and NFL Hall-of-Famer Cris Carter. He admits wrongdoing, but attempts to call out the three broadcasters for what he implies is their feigned concern over his well-being. Gordon writes, "The thing is, though, you don't even know me."

Gordon goes on to offer some history on his rough upbringing and how — despite his very public failures — he has succeeded in making it as a professional football player. He says, "If I have a 'problem,' it is that I am only 23 years old — with a lot left to learn."

But judging by the responses to Gordon's open letter, it's hard to tell if it helped his case at all.

"You doing wrong and blowing opportunities can inspire somebody else to go down those same wrong tracks. ... I ain't taking back a damn word," Smith said.

Smith wasted little time in airing out his thoughts on Gordon's letter, calling the 23-year-old "ignorant." Smith said his criticisms of Gordon were less about the footballer and more about what he represents — a young black man who "made it" but continues to squander opportunities.

Although Gordon divulged details about his personal life, ESPN's Jeremy Fowler says Gordon fails to identify a real problem with the repeat offenses. He writes Gordon is "basically blaming his issues on being a 23-year-old with a few lapses in judgment. ... That paints with the same broad strokes that your critics used on you."

Finally, Bud Shaw from Cleveland.com writes, "I'm not sure what his letter accomplished." Shaw adds if Gordon's critics don't know anything about him — as Gordon says in his letter — then his critics also have no way of telling if his letter is sincere.

Gordon's letter comes on the heels of testing positive for alcohol; he was instructed by the NFL not to consume any alcohol during a probationary period following a DUI arrest in early 2014. The NFL hasn't ruled on Gordon's case yet, but he could receive a year-long ban.