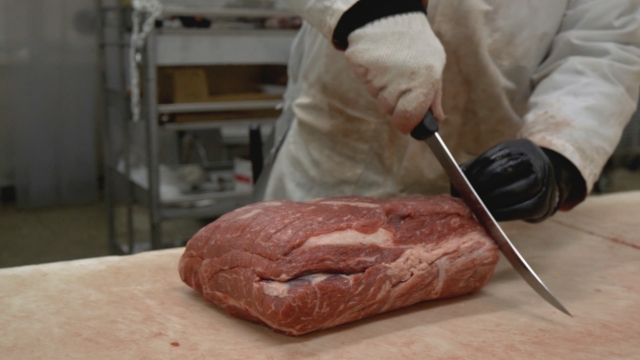 You may have recently heard of halal meat. But why are some people so afraid of it?Well, we're here in Detroit's Eastern Market to basically debunk the myths of what "halal meat" really is.

The Arabic word "halal" literally translates to "permissible" or "allowed."There are a handful of requirements that make a meat permissible in Islam.But just because it's permissible for Muslims, that doesn't mean it's only for Muslims. "The Halal meat is not just for Islam. The halal meat could be for everybody on the Earth," said Aref Saad, a halal meat wholesaler.  That's probably because it tends to be healthier, cleaner and often more affordable. "Well, the first thing people need to know is halal meat is healthier than non-halal meat," lead butcher Ali Saad said. "What makes it halal is the way that it is killed. When all the blood is drained out of the meat, it prevents it from getting foodborne illness."It's also required that the animal feels as little pain as possible, both physically and emotionally. That means using a very sharp, clean knife along the throat, with one swift cut — and this must be done with no other animals around watching. Similar to kosher meat, the person who carries out the slaughter must be of practicing faith. "You know, we turn it towards Mecca, we bless it and say a small prayer on it," Ali Saad said. "The things that I've heard are, you know, we're trying to feed people our meat, but I think people need to know how healthy it is."The biggest difference in the meat is something you can actually see.

"So, pretty much when you put a piece of steak that is actually halal, and you put it in the fridge for four or five days — and I can guarantee this — even a week, you will not see a single drop of blood on your plate. But you take a single piece of meat that is not halal, put it in your fridge for a couple of hours, and you'll see a ton of blood," Ali Saad said. So the process of halal really starts at the treatment of the animal, all the way until it reaches your burger bun — but it really comes down to the cleanliness and health of the meat.