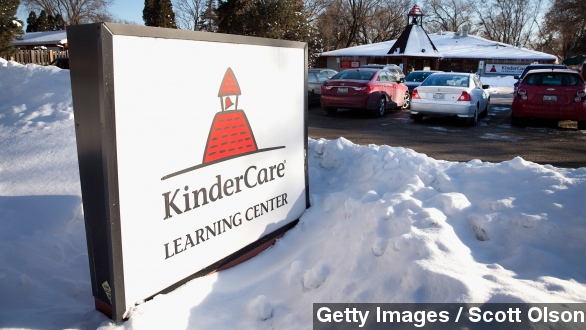 Five babies at an Illinois daycare are believed to have contracted the measles, and at least ten more could also be at risk.

According to the Centers for Disease Control and Prevention, more than 100 people in 14 states have been affected by the measles virus since last month.

That number rose Thursday after an Illinois daycare was hit by the outbreak. Five infants are now believed to have been infected. Two cases have been confirmed so far.

"Illinois public health officials are investigating the outbreak at KinderCare Learning Center in Palatine. ... This news comes after Cook County's first case of measles was confirmed as an adult,"​ WHOI reported.

However, that case is not believed to be related to this most recent outbreak. Test results for three of the five possibly infected babies are still pending, but officials say there could be as many as 10 more children who were exposed. Those children are being asked to stay home, and anyone else not vaccinated is being asked to stay away from the daycare for at least 21 days.

But this outbreak is different than the more than one hundred previous cases. The infected children in Cook County, Illinois, are all under one-year-old and are too young to receive the measles vaccine.

"The reason we recommend 12 months to 15 months in children is because they usually carry their mothers' antibodies against the virus. ... Now they're still at risk because these antibodies go away over time," Fox Business contributor Dr. Robert Lahita said.

A lack of vaccinations is a major factor that contributed to the spread of the measles virus in California. Although Illinois has about a 95 percent vaccination rate, NBC explains children who can't be vaccinated have a high risk of contracting the potentially deadly virus.

According to NBC, "Four million kids in the U.S. are similar situations, not old enough for the vaccine. If exposed to the virus, nine in 10 of those babies will get sick."

"There are likely to be more cases ... The cat's out of the bag," Cook County Chief Medical Officer Dr. Terry Mason said.

But as the Chicago Sun-Times points out, Mason also "stressed that the vast majority of suburban Cook County residents have been vaccinated and, therefore, have a very low risk of contracting measles." There have been 10 cases documented in Illinois the past five years but never in a cluster like this outbreak.

This news follows a Tuesday measles scare at a daycare in Santa Monica, California, that left 14 babies in quarantine.