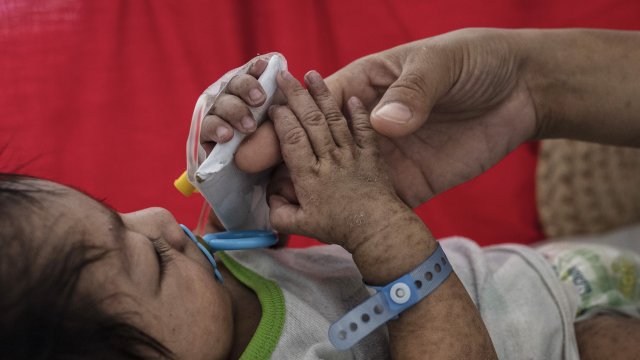 SMS
Measles Cases Surge in Europe As Global Outbreak Spreads
By Peter Hecht
By Peter Hecht
May 7, 2019
The World Health Organization reports more than 34,000 measles cases in region in the first two months of year, led by an epidemic in Ukraine.
SHOW TRANSCRIPT

The measles outbreak is growing in many parts of the world - and now Europe is seeing a surge in infections.

The World Health Organization reports more than 34,000 cases of measles in Europe in the first two months of 2019, more than triple the amount compared to the same time last year. 13 people have died as the virus has spread to 42 European countries.

The WHO says Ukraine is facing an epidemic of 25,000 measles cases and the problem is also acute in Romania and Albania.

The WHO blames the spread on low vaccination rates in many areas: “If outbreak response is not timely and comprehensive, the virus will find its way into more pockets of vulnerable individuals and potentially spread to additional countries within and beyond the region."

Elsewhere, the Philippines, Thailand, Israel and the United States are also seeing dramatic spikes in infections. The CDC confirms 764 measles cases in 23 states through May 3 this year. That's up from 372 cases in all of 2018 and is the highest number since measles was declared eliminated in the U.S. in 2000.