Md. School Board Wipes All Religious Holidays From Calendar 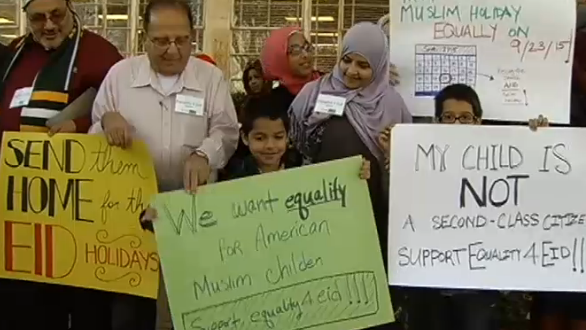 Maryland parents who have campaigned for decades for the Montgomery County School District to recognize Muslim holidays found themselves with a clean slate Tuesday ... literally.

The Montgomery County School Board, in a 7 to 1 vote, did not decide to incorporate Muslim holy days. (Video via CNS Maryland)

Instead, it voted to strike everyone else's religious holidays from the calendar, Christmas and Yom Kippur included.

The decision to deny acknowledgement of any religious holiday is surprising to some who consider Montgomery County to be a leader in the public school realm.

The county has a 12,000-plus Muslim population, which has been advocating for symbolic recognition of Muslim holy days in the name of equality and to allow Muslim students the ability to miss school without getting behind in class. (Video via CNS Maryland)

Christian and Jewish holy days are currently observed by the school district.

Superintendent Joshua Starr cites high absenteeism as the reason for the district's closing on traditional Christian and Jewish holidays. (Video via WJLA)

His recommendation was to keep the schools open for "operational" purposes on Muslim holy days.

Which is why, in 2013, the local Muslim community wanted to display a big attendance drop.

"Muslim public school students in Montgomery County, Maryland, are being urged to stay home tomorrow to celebrate one of Islam's holiest days. It's all part of a push to make two Muslim holy days full-fledged school holidays." (Video via WTTG)

Unfortunately for the families behind the cause, the school board reported absences that day that "were only somewhat higher than a comparable day the previous week."

After the vote Tuesday, some who were involved in the debate weren't pleased with the school board's decision to nix all holidays, instead of including Muslim ones.

"I'm disappointed ... as a member of the Muslim community, that's not what I was looking for." (Video via WRC-TV)

They're not the only upset group.

"The Jewish community is not happy that their holidays were stripped from this calendar."

It's important to note that the school district will still be closed as planned next year for Christian and Jewish holidays, as it has done for decades. Muslim children will not have absences counted against them for their holy days, but will still be expected to make up missed school work.

Starting next year, Christmas will be during "winter break," Easter will be during "spring break," and Rosh Hashanah and Yom Kippur will just be noted as "no school for students and teachers."