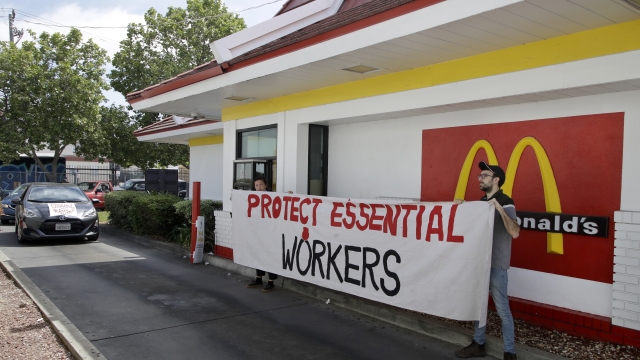 SMS
McDonald's Workers Strike Over COVID-19 Concerns
By Gage Jackson
By Gage Jackson
May 20, 2020
Hundreds of workers say McDonald's did not provide adequate health protections amid the pandemic though company says safety is a "top priority."
SHOW TRANSCRIPT

Hundreds of workers at McDonald's restaurants in 20 cities went on strike Wednesday to pressure the fast-food company to improve what employees say are inadequate protections amid the pandemic.

According to labor organizers, McDonald's workers in 17 states have contracted COVID-19, and a survey reportedly says 42 percent of workers from March 31 to April 6 were not ordered to wear masks or gloves while working.

The "Fight for $15" labor campaign said 22 percent of McDonald's employees have gone to work while feeling sick because of a lack of paid sick leave, fear of managerial discipline or because they simply can't afford to miss a paycheck.

The lawsuit said McDonald's failed to provide enough hand sanitizer, gloves and face masks, adding that the company did not inform workers when an employee was infected with the virus.

McDonald's has denied the allegations and insisted that safety is a top priority. The company adds that the concerns presented by strikers do not represent McDonald's 850,000 workers nationwide.