McDonald's Will Use Real Butter Instead Of Liquid Margarine 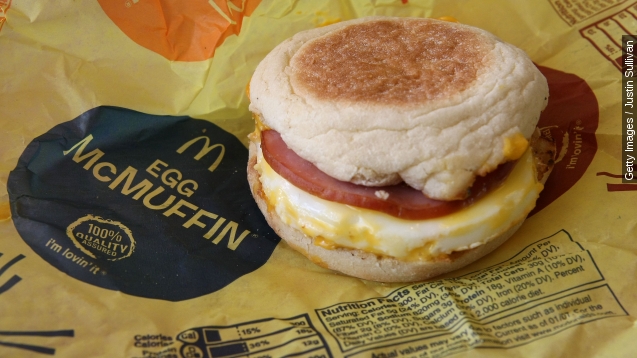 CNBC reports McDonald's will start cooking with real butter once its supply of liquid margarine is used up.

If you order an Egg McMuffin from McDonald's in the near future, it might taste a tad different than what you're used to.

It's because the fast food chain is reportedly swapping out the liquid margarine it used to use for real butter.

McDonald's used liquid margarine to toast any biscuits or English muffins, as well as cook eggs for its menu items.

No reason has been given for the switch, but CNBC, which first reported the news, stated unknown sources said "the rollout would occur once locations deplete the supply of liquid margarine."

McDonald's has been busy the past few months making changes to how it cooks its food.

In June, it was reported that the company was increasing the size of its beef patties for its Quarter Pounder. (Video via McDonald's)

Before that, McDonald's announced it was only going to use chicken and milk from animals raised without antibiotics.

All of these changes are being made in an effort to boost slumping sales.

In July, McDonald's announced second-quarter sales for the year had dropped 10 percent — something president and CEO Steve Easterbrook called "disappointing."

Since timing for the switch to real butter depends on McDonald's locations using up their liquid margarine, there's no definitive timeline for when the change will happen.

But it could have a big impact on the fast food chain's menu come October, which is when The Wall Street Journal reports McDonald's could begin offering its breakfast menu items all day long.