McDonald's Sales Are Up For The First Time Since 2013 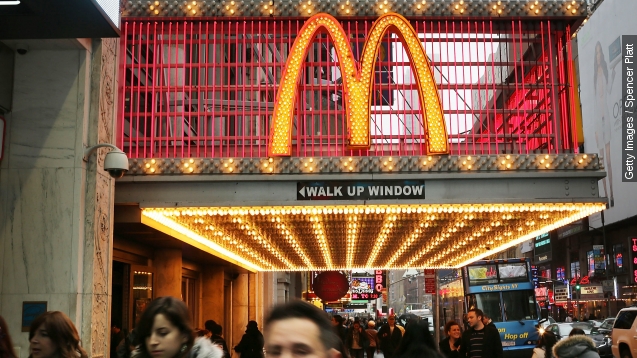 SMS
McDonald's Sales Are Up For The First Time Since 2013
By Carter Woodiel
By Carter Woodiel
October 26, 2015
The fast-food chain has been tweaking the little things, and it has paid off. Sales at U.S. McDonald's have risen for the first time in two years.
SHOW TRANSCRIPT

Been craving a Big Mac and fries lately? Apparently, you're not alone. Sales at U.S. McDonald's restaurants are rising for the first time in a while.

The company says its sales in the U.S. have risen just under 1 percent in the third quarter of 2015, the first time the world's largest burger chain has seen its American sales go up in two years. (Video via McDonald's)

The jump in sales can be attributed to a lot of little things.

First off, the restaurant's menu has been simplified. That was in response to franchises complaining that complicated menu items were causing slower speeds at the counter. (Video via McDonald's)

McDonald's has also tweaked how its food is prepared, like switching from margarine to butter on its Egg McMuffin and changing how its burger patties are seared. (Video via McDonald's)

The chain's also tried to improve its image regarding where its food comes from. The company announced it would only serve chicken not treated with antibiotics and would switch to cage-free eggs in the next decade. (Video via McDonald's)

Then, of course, there's all-day breakfast, which McDonald's rolled out nationally on Oct. 6 to try to boost sales. (Video via McDonald's)

McDonald's CEO Steve Easterbrook, who took the job in March, said it's too early to judge the success of all-day breakfast, but he's pleased with the other changes under his leadership. (Video via CBS)

And why wouldn't he be? After the company's sales increase was announced, McDonald's stock prices jumped to an all-time high.