McDonald's Has A New Chinese Name That Doesn't Translate Well 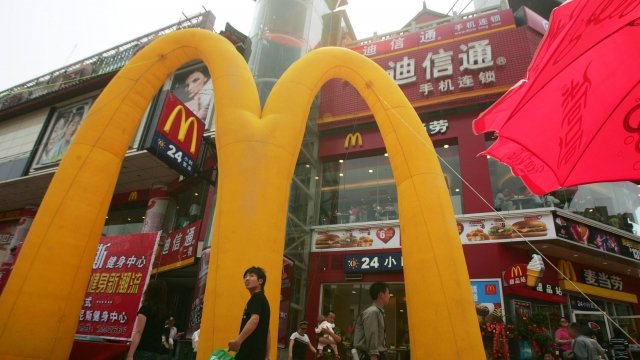 McDonald's confirmed it changed its official Chinese name to "Jingongmen" — but some overseas say that sounds like a state-owned company.

McDonald's is now registered under a different name in China, and it might not get the warm welcome the company was expecting.

The fast food giant was registered as "Maidanglao" — a Chinese riff on its English name.

On Wednesday, McDonald's confirmed it changed its official name to "Jingongmen," which roughly translates to "Golden Arches."

CNN notes some Chinese consumers recognized the company's history and the significance of the arches. But others said "Golden Arches" sounds "rustic" and backward or like a state-owned company.

China's next generation of leaders doesn't include an obvious successor to President Xi Jinping.

A lot of English names and idioms don't translate well. So companies will change their names in China to something that keeps the spirit, or purpose, of the company.

And Coca-Cola is called "Ke kou ke le," which means "tasty and fun."

But companies don't always get the name-change right.

Airbnb went with "Aibiying," which means "welcome with love." But Chinese consumers had trouble pronouncing it.

And the Dallas Mavericks vowed to change its name in China last month after realizing that for over two decades its translation really meant the "little cows."

If the Chinese market really isn't embracing McDonald's new name, the company has some good news. It's only going with "Golden Arches" for its business registration. It plans to stick with "Maidanglao" for all its branding.