McDonald's Brings Its Mozzarella Sticks To The Entire US 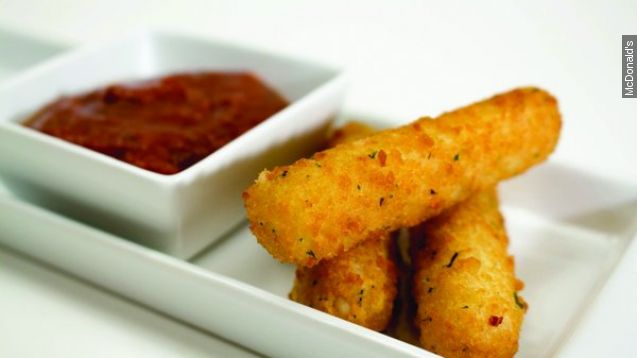 SMS
McDonald's Brings Its Mozzarella Sticks To The Entire US
By Matt Picht
By Matt Picht
November 10, 2015
After months of local testing, McDonald's is ready to bring its mozzarella sticks to the whole nation.
SHOW TRANSCRIPT

Flush with the success of their first profitable quarter in a good long while, McDonald's is adding a new snack to their menu: fried mozzarella sticks.

The bite-sized cheesy snacks are already available in McDonald's locations across the pond, and the company's been testing them in select U.S. locations. Now, they're rolling out nationwide — the current planned price is $1 for 3 sticks.

The move is likely part of the company's efforts to rebrand itself as a more upscale "fast casual" chain. McDonald's is hoping healthier ingredients and new menu options will entice consumers who've been driven away by the restaurant's reputation for greasy, unhealthy food.

But these new initiatives run the risk of overcomplicating the franchise's menu, something that's hurt McDonald's in the past. At the beginning of last year, the company promised investors they'd focus on introducing "fewer products with better execution."

This video includes images from Getty Images and Joseph Nicolia / CC BY SA 2.0.