With Shutdown Deal, Lawmakers Still Have Work To Do On Border Security 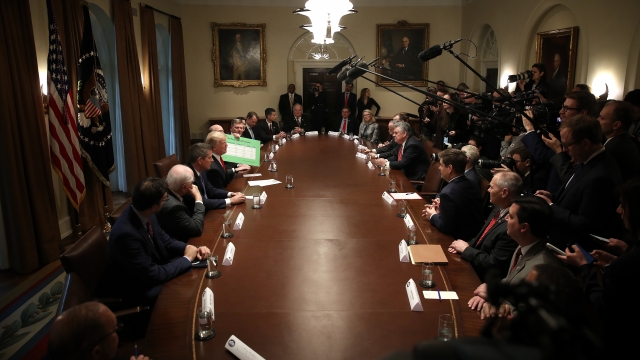 With President Donald Trump's stamp of approval, there's finally an end in sight for the partial government shutdown.

Once the House and Senate pass the agreed-upon legislation, the government will be funded through Feb. 15. That allows the affected government agencies to reopen and furloughed workers will get their back-pay.

But there's still work to be done. In the coming three weeks, Republicans, Democrats and the president need to strike a deal on border security that makes everyone happy.

"I hope our democratic friends will stay true to commitment they have stated constantly over the past weeks —  that once government was reopened they'd be perfectly willing to negotiate in good faith on a full year government funding that would include a significant investment and urgently needed border security measures, including physical barriers," Senate Majority Leader Mitch McConnell said.

"I genuinely hope that this process can produce something good for the country and acceptable to both sides," Senate Minority Leader Chuck Schumer said.

Presumably lawmakers on both sides don't want to end up shutting down the government again in a few weeks. So finding a compromise on border wall funding will be key to ensuring the government stays open.

"Shutting down government over a policy difference is self-defeating. It accomplishes nothing but pain and suffering for the country and the American people. ... We can never hold American workers hostage again, " Schumer said.