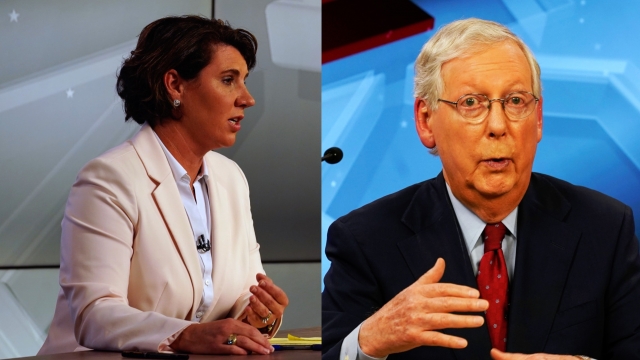 McGrath, a retired marine, is aiming to unseat the six-term senator. She criticized his response to a new COVID relief bill while many are still out of work.

"Here in Kentucky, we have a million Kentuckians that have filed for unemployment some time in the last six months. We have 300,000 Kentuckians that still don't have health care in the middle of a coronavirus," said McGrath. "And he's walking away from negotiations even now when President Trump even wants negotiations to happen before this election."

"Yeah, look, I know how to make deals. I made three major deals with Joe Biden during the Obama era," said McConnell. "The problem here has been an unwillingness by the Speaker [Pelosi] to make a deal."

McConnell also defended Supreme Court Nominee Judge Amy Coney Barrett and said no one really believes the court will strike down the Affordable Care Act  — a key sticking point for Democrats who oppose her nomination.

McConnell, who has served in the role since 1985, leads in polls across the state.