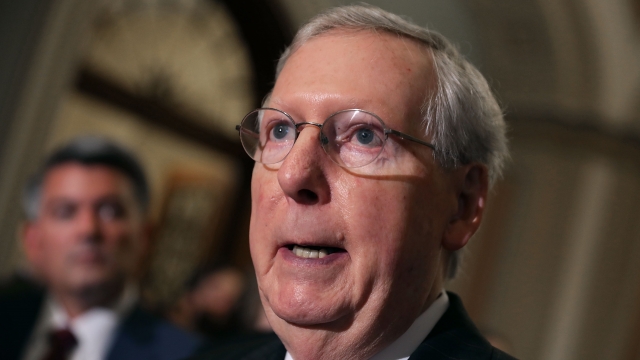 SMS
McConnell Introduces Bill To Raise Age To Buy Tobacco Products To 21
By Ahmed Jawadi
By Ahmed Jawadi
May 20, 2019
​The Tobacco-Free Youth Act applies to all tobacco products, including e-cigarettes and vaping devices.
SHOW TRANSCRIPT

McConnell, along with Democratic Sen. Tim Kaine, introduced the bill on the Senate floor on Monday. The Tobacco-Free Youth Act would raise the age to buy tobacco products, including e-cigarettes and vaping devices, from 18 to 21 nationwide. That age limit would also apply to members of the military, despite McConnell saying otherwise last month. The bill also allows for individual states to pass stricter laws.

McConnell hails from Kentucky, one of the biggest tobacco-producing states. He said Monday that although he's "consistently stood up for Kentucky [tobacco] farmers," he knows that "farmers don't want their children to get hooked on tobacco products while they're in middle or high school any more than any parents anywhere want that to happen."

He pointed to the rise of vaping among teenagers as a big reason for the bill's creation.

"Youth vaping is a public health crisis," McConnell said. "It's our responsibility as parents and public servants to do everything we can to keep these harmful products out of high schools and out of youth culture."

According to the CDC, the number of high school students using tobacco products grew by nearly 38% in 2018, and the agency largely attributed that to e-cigarettes.

The bill follows similar tobacco legislation in 14 states and policies at retailers like Walmart, Walgreens and Rite-Aid.