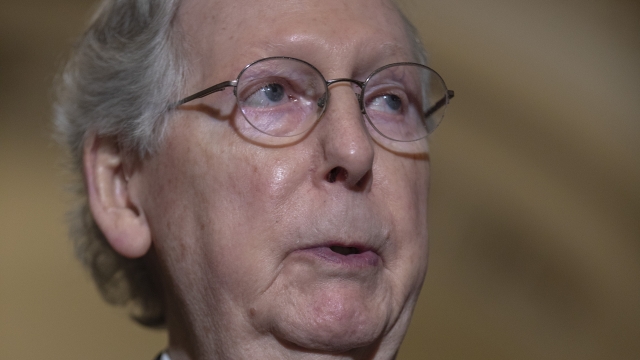 SMS
McConnell Says The GOP Would Fill Any Potential SCOTUS Vacancy In 2020
By Briana Koeneman
By Briana Koeneman
May 29, 2019
The Senate majority leader was answering a question from an attendee at a chamber of commerce luncheon in Kentucky.
SHOW TRANSCRIPT

Mitch McConnell is taking some heat after he said Republicans would work to confirm a new Supreme Court justice if a spot opens up in 2020.

The Senate majority leader made that comment during a chamber of commerce lunch in Paducah, Kentucky, on Tuesday.

An attendee asked McConnell what his position would be on filling a Supreme Court spot if a justice were to die next year. He replied, "We'd fill it."

McConnell's remarks were met with laughter from the audience at Tuesday's lunch. But Democrats weren't too pleased.

That's because after Justice Antonin Scalia died in 2016, McConnell and other top Republicans decided not to vote on President Barack Obama's nominee to fill the position. They argued the next president should be allowed to make that call.

A spokesperson for McConnell said Wednesday he didn't consider Obama's nomination because, at the time, the White House and the Senate were controlled by different parties. Now, they're both controlled by the GOP.